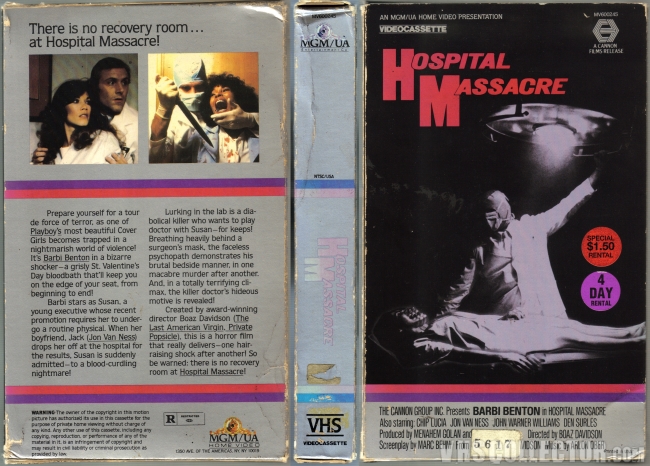 Being a big fan of the 1981 slasher My Bloody Valentine (not to be mixed up with the horrendous 2009 remake of the same name), there was a time when I did not consider there was room for any more rampage of psycho killer on Valentines Day type flicks. Cue Hospital Massacre, which although it can merely stand in the shadow of the aforementioned, it is however bloody good fun, and rather unexpected. Likewise if we are talking hospital based horror it is not a patch on the 1981 offering Visiting Hours. All this aside this early 80’s relatively obscure gem of a film isn’t a bad little romp for a Golden Age slasher- and certainly doesn’t deserve some of the overhanded criticism it’s recieved from other reviews. It is what it is, Barbi Benton, former playgirl and once long standing partner of serial perv Hugh Hefner, runs around screaming in a hospital, in partial states of undress, stalked by a killer in full surgeon regalia. The plot is heavily contrived, but interesting all the same, and I have to say it kept me guessing right to the end. 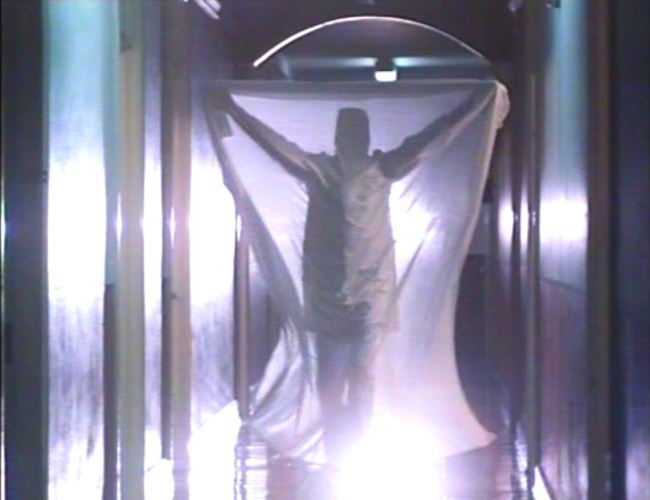 The story begins with Susan Jeremy as a child (played by fresh faced Elizabeth Hoy from 1981 oddity Bloody Birthday) receiving a Valentines card from a schoolboy admirer- to which her and her brother have a little chuckle over- whilst being watched by her prepubescent pursuer who is peering in through the window. He obviously is not impressed with their amusement as when Susan returns from cutting the birthday cake she finds her brother dead after being hung rather crudely from a coat rack. Fast forward 19 years and we meet Susan again, now played by the rather glamorous looking Barbi Benton, who is going into hospital for some test results from her routine check up, and thus the fun begins…

The plot is completely forced, the main premise apart from random kills appears to be designed to have Barbi strip naked for a bizarre medical examination lasting almost 5 minutes. But then it’s a typical 80s slasher so what more can one expect? As long as killings and screaming begins who gives a stuff how it got there. In some ways the ridiculousness of the plot only adds to the amusement factor- at least it can if you go into things with an open mind. It’s definately one that doesn’t require too much thought, given there are so many plot holes I am surprised half of the cast did not disappear down them into the abyss. Or maybe they did, as most actors in this picture were never to be heard of again after making this feature.

‘The results are inconclusive’… Dr. embarks on bizarre examination to get to the bottom of things…

For all it’s flaws though Hospital Massacre delivers on the staples with a fair amount of glorious eighties cheese to boot. Never fear there is plenty of creeping around hospital corridors, and stalking a go-go, topped off with some spiffing kills which aren’t too shabby given the tight budget associated with the piece. The story doesn’t stand up to reasoning- but when do they ever?- considering on Susan’s arrival at the hospital it appears some menacing character has swapped Susan’s medical notes, and associated x-rays with a fake set, giving the doctors serious cause for concern. Just what they expect her to have is anyones guess, the x-rays look like someone has filled her brain with tinsel, but then given Barbi’s personal life choices this could have just been a private joke on the behalf of the director. How the stalker knew she would be going to be at this specific hospital, on this particular day? Who knows, and who cares? It means poor Susan is kept in for further tests, all whilst protesting her good state of health, and the killer gets to stalk her, and wipe out half of the cast in the process.

The director is pretty generous with the good old false starts in an attempt to add to the tension. Some work and some of them are just hilarious giving the proceedings an odd vibe that feels slightly offbeat (child character cutting a birthday cake with the worlds biggest carving knife, man eating a hot dog in the lift, spilling ketchup on Susan’s shoe). But the tension does manage to build regardless of this as the film gets moving. The accompanying score contributes to this fairly effectively despite being an amalgamation of themes from Psycho and The Omen.

It is worth noting that this movie is not available on DVD yet- and therefore it remains on the obscure side, crying to be picked up for the digital domain, because despite being an absolute cheese fest of 80s bad hair and even cheesier slasher clique, Hospital Massacre does somehow manage to hold its own, in amongst a prime vintage year for the slasher For novelty factor alone it definately deserves a release. The VHS copy has become particularly sort after in recent times with sellers asking for in excess of $100 for decent copies on ebay and amazon. Do not despair though it is available on youtube to watch, obviously converted from VHS, and while the quality is not that great (the uploader really should have got his tracking adjusted properly before submitting) it will give you a good idea of this movie.

Another interesting fact about this movie is the director of this film Israeli born Boaz Davidson has now become rather successful in the arena of production and writing screenplays, concentrating now on more blockbuster efforts such as 16 Blocks, The Expendables, Black Dahlia, and the 2008 Rambo film. Perhaps he would like to forget Hospital Massacre as one of his debut offerings in full length feature making ,(having been involved in mainly Israeli TV prior to this) as it appears to be one of those films that got lost in the land that time forgot, never to be talked about other than in whispering circles. One thing is for sure, you could do a lot worse, if you enjoy a good old slash and hack in contrast to the spate of rather banal and generic modern-day slashers watching this is a reminder of no matter how bad, the 80s always did it better.

No trailer, but you can watch the whole movie here: