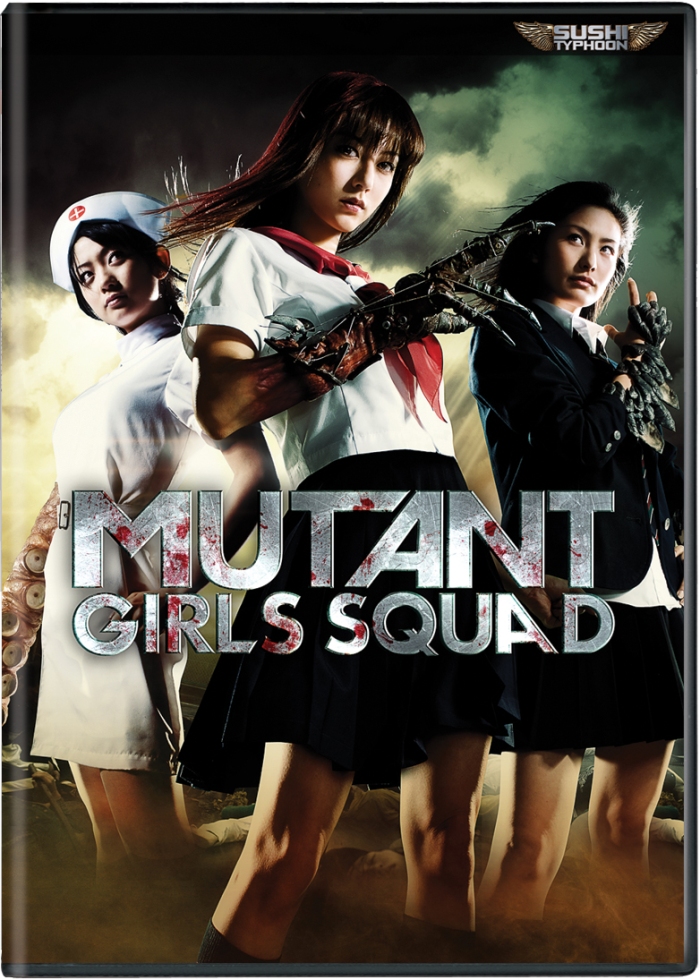 In line with the flamboyant nature of this feature Mutant Girls Squad has no less than three directors. Comprising of three sections, each director took a turn with a segment each. However it still makes for a fairly coherent piece and none of the parts are noticeably different from one another in directorial style, instead complimenting one another. Noboru Iguchi (The Machine Girl) and Yoshihiro Nishimura (Tokyo Gore Police) team up with well seasoned actor, Versus star and director Tak Sakaguchi to create this all out, OTT, goretastic version of x-men on steroids. The film has received mainly positive reviews and saw its International debut at the New York Asian Film Festival in 2010. For anyone familiar with any of the above director’s previous work you know what to expect, just about anything, and Mutant Girls Squad is no exception.

The story follows Rin (Yumi Sugimoto), a downtrodden, bullied and somewhat nerdy girl who is about to reach the age of 16. In the days leading up to her birthday she starts to experience a pain in her arm, and following a run in with a group of bullies at school discovers the cause. Yes Rin is a mutant, apparently her powers do not kick in until she turns 16, and as her birthday arrives so does her new power, a clawed hand, much to the disgust of the local community around her. What follows is what I can only describe as utter madness with the tempo of a 90 minute Jackie Chan fight scene on fast forward. Not only is Rin’s father a mutant, a secret which he has managed to keep from her for many years, but there are more. The Hiruko are ancient mutant warriors ostracised from the mainstream of society and hunted down by government agents, and it is not long before Rin is safely ensconced in the bosom of her new family of outcasts and learning to channel her new powers. The makers have used the idea of ‘mutant’ to really go to town with some completely out there ideas and I found myself just astounded by how far they pushed the boundaries of this concept. 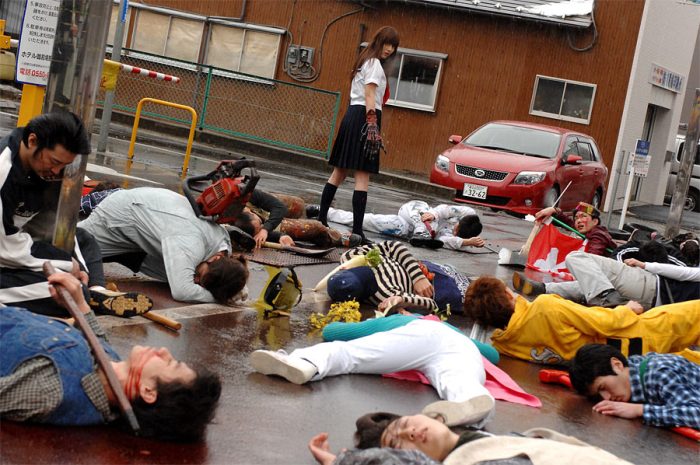 For the most part the bulk of the cast consists of strong female characters. Rin with her newly acquired claw hand and Japan’s answer to a girl version of Wolverine in a school uniform. The Hiruko comprise of Rei,(Yuko Takayama), a bird woman with a serious chip on her shoulder and hatred for humans, Yoshie, (Suzuka Morita) the delightful cosplay nurse who can also morph into a bizarre being with octopus arms and an elephants trunk, and then a series of rag tag characters with the strangest mutations ever seen in cinema.  This includes a woman with samarai swords which come out of her breasts, one with a red face who can apparently sing,(yes we were confused by that one, but hey!) mutant belly girl with a living being attached to her torso (obviously inspired by Total Recall), someone with tiny arms on the side of their head, a woman who carries the disgruntled looking head of her baby brother around, and my personal favourite Chainsaw ass, yes that’s right a girl with the power to produce a live chainsaw from her backside. Heading this team of misfits is director Tak Sakaguchi taking the role of a transvestite samurai with erectile dysfunction when it comes to his particular mutant power. While the cast do their best in their consecutive roles it has to be said they serve mainly as walking special effects as this element dominates the movie throughout, just when you have finished gawping in awe at one crazy character, another and another comes along to steal the thunder. 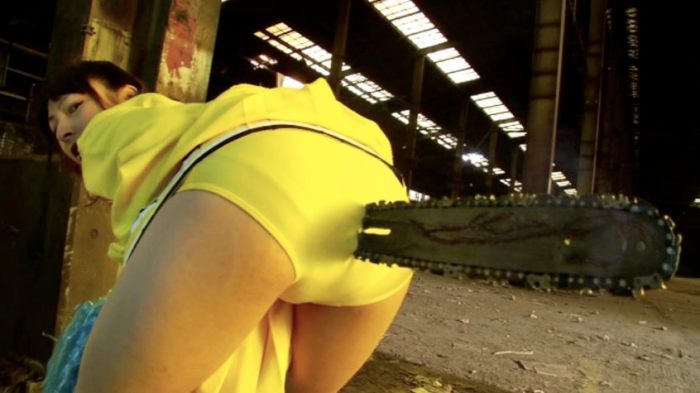 One thing I did enjoy about this movie, as if the bizarre interpretation of mutant on screen was not enough, was the pace. It is incredibly fast being 90% action. There is little time spent on character development, although some attempt is made with the lead characters, but not much. As the plot crashes on full steam ahead it is difficult to keep up at times, and occasionally confusing, however that matters not one bit. There are no deep messages contained in this movie so you just have to roll with it and revel in the madness. As the story progresses from one over the top fight scene to the next I could not help finding myself mesmerised as to where it was going to end up. As the movie draws to its final conclusion racing to the finish line (completely losing the plot for the last 20 mins or so) it is far from anti-climatic, and settles on what I can only describe as a splatter festival of gory violence which will not disappoint even the most hardcore of gore fans. While this film has more gratuitous violence than you can shake a stick at it is played out solely for laughs and for those of us with a sick and twisted sense of humour there are plenty to be had. As with a lot of Asian splatstick or horror comedy movies I did find some of the humour did not translate however, especially the jokes with obvious relevance to Japanese pop culture, but that did not really encroach on my enjoyment of the feature overall. 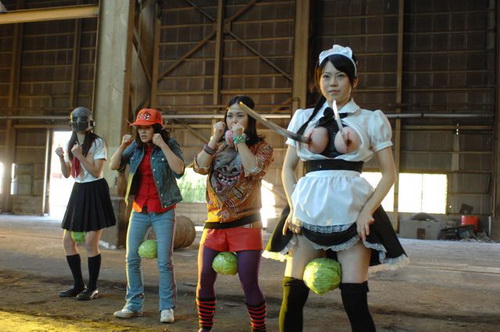 Not unlike other movies of this type, and between the collective of directors involved in this movie they are establishing quite a portfolio, the use of over the top CGI effects gives Mutant Girls Squad a distinct anime/ comic book feel. This however works with the story given that no one could see a woman with a chainsaw gaping from her buttocks as anything but unrealistic, even the logistics of it is hard to fathom (a rotational head might have made it easier for her to work her fight scenes?). The way in which the film is shot only adds to this cartoonised theme which makes it easy to give yourself licence to completely absorb yourself in this vision of otherworldly wonder. There are some pretty outstanding old school prosthetics effects to boot as well, which would not be out of place in an 80’s splatstick venture, and add to the charm of the overall piece. The makers show absolutely no restraint when it comes to the gore either and here we are treated to blood spraying, oozing guts and exploding heads galore, decapitation, limb chopping all with a bit of kick ass kung fu thrown in for good measure. What you certainly won’t be if you decide to check this movie out is bored. Where else can you see the aforementioned chainsaw ass woman (yes we were quite impressed with that one!), people blown up by a massive baby’s head, a giant pair of acid-milk squirting boobs, someone pummelled in the face by detached rocket feet, or a man with a weird bunch of creatures for his nipples and crotch? Mutant Girls Squad is where it is if you want to immerse yourself in copious amounts of blood, violence, and gore with some of the most far out mutants ever to have graced the silver screen. This feature was one of those rare movies you can just get lost in, a definate must, just enjoy, prepare to be baffled and have fun with this splatterific piece of pure indulgence. 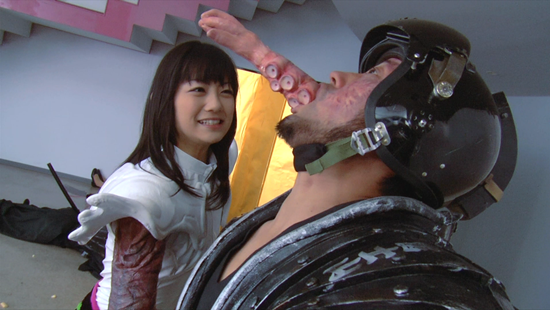