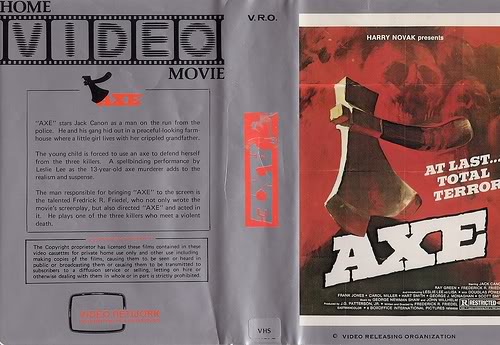 ‘Pretty Lisa took an axe, gave her captor 40 whacks, when she saw what she had done she gave his partner 41’

The inspiration for the title of this movie, as described by purveyor of sleaze and exploitation king Harry Novak who is responsible for presenting it, was the need for a punchy title which did not require much type. With production values at an all time low and exploitation factors high this just about sums up the value of this trashy affair. Originally labelled with the rather mundane title Lisa, Lisa, the  rebranding under the name Axe had the desired effect in attracting the unwarranted attentions of the UK censors, giving this movie a place on the list of 72 banned video nasties and thus securing its place in horror film history. The film was also released in the early 80’s under an alternate title California Axe Massacre (despite the fact it is not set in California or hardly warranting a massacre label), in an obvious attempt to cash in on the then recent success of the far superior Texas Chainsaw Massacre. Finally passed by the BBFC in 1999 as an 18 certificate after no less than 19 cuts, Axe could not be seen in its uncut entirety until 2005 in the UK. On viewing though I find it hard to understand exactly why this film was banned. For anyone expecting a veritable feast of graphic gore and murder it will not be found here. Tame in comparison to many of its peers it would seem this is one of those sad cases of an undeserved reputation preceding a fairly lukewarm affair. That said however I could not help but like Axe to some extent for reasons I don’t completely understand myself. Directed, written, and starring the relatively unknown Frederick R Freidel after watching it sadly though it becomes apparent why this guy has not become a household name in the annals of horror. At least the BBFC did him a favour in giving him the title of having a banned movie as his one and only accolade in his strictly limited career.

In a story which takes on a Straw Dogs meets Lizzie Borden type scenario (although not being a patch of the Sam Peckinpah 1971 film), Axe plays out along lines of typical rape/ revenge exploitation fodder. When a group of gangsters (Steele, Lomax and Billy) go on the rampage after committing a murder, they stumble upon the secluded home where disturbed girl Lisa and her catatonic grandfather live and decide it is a perfect location to hide out. That is not before marauding around the countryside and terrorising a poor shop assistant with tomato ketchup. Lisa is not your typical girl though, and it is not long before this group of criminals discover they are about to get their just deserts.

One thing that stands out in this movie is Leslie Lee’s portrayal of mentally disturbed girl Lisa. With hardly any dialogue Lisa carries a haunting presence at times. This is backed up with her unflinching ability to hack the heads off chickens with her faithful axe which works in the suggestion that her butter wouldn’t melt appearance is not all it seems. Her lack of speaking also aids to reinforce her detachment which makes her character perhaps the most believable of the cast. Less can be said for the Grandfather played by Douglas Powers, who must have thought vacation time had come early as he simply has nothing to do. Sitting in a chair staring inanely at an out of tune tv is about the limit of his role, from which he fails to achieve any screen presence and serves merely as an unnecessary prop. As for the gangsters Steele (Jack Cano) Lomax (Ray Green) and the director himself Fredrick R Freidel as Billy, all can be said is they manage to represent all the menace of the easter bunny surrounded by a bunch of kittens. Under these circumstances it is not hard to understand why Leslie Lee manages to stand out in her role.

In a story which represents the Bermuda Triangle in regards to plot holes Axe could have been a much better movie than it actually played out. Character development and motivation are completely ignored in favour of long dragging scenes and pointless dialouge. For a movie which hardly manages to rack up just over an hours viewing time it is surprisingly slow. A drab affair indeed, and I cannot help wish that the makers had worked on developing some of the darker themes obviously hinted on in this movie. Watch with imagination is all I can say, there are some hints of cannibalism only suggested upon which would have been worthwhile exploring, as would the back story of Lisa and her grandfather. Instead these points are only randomly presented in the plot (Lisa’s parents are dead, why? The grandfather was once an accomplished military man why has he ended up in the state he is in? ) with little or no explanation, only to be quickly forgotten again. Instead everything is implied and leaves nothing more than a tepid aftertaste of something which could have been a lot more exciting. Another bizarre aspect is characters seem to act without rhyme or reason, we see in one scene for example Billy madly flee Lisa’s house seemingly unprovoked with Lomax and Steele in hot pursuit, only to return again later on as if nothing had happened. These pointless factors act only to confuse the limited plot and do nothing to add tension or interest, serving only to slow things down to almost a standstill at times. 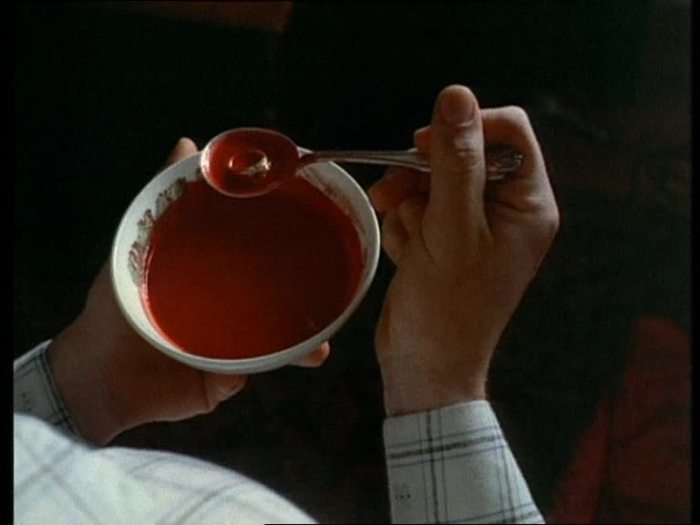 Has Lisa been adding special ingredients to the soup?

It is a sad factor that any gore or shock value in this movie is severely hampered by lack of budget. The camera work is completely rigid, which just about mirrors the acting ability it is capturing, the sound effects are amateurish, and any bloody scenes are ruined by the print quality which shows as orange and therefore completely unrealistic. In one particular scene when one of the gangsters inflicts a beating with a child’s toy the sound effects come off as someone slapping the floor with a basketball snatching them from the realms of credibility straight into comedy. Only adding to the shoddy values is the relentless George Norman Shaw soundtrack which starts off quite haunting on a piano, but then quickly builds into a crescendo of annoying drumming which does not let up for the rest of the feature. There also seems to be some weird symbolism featuring eggs going on which was far too arty and intelligent for this type of feature, and had the director been less concerned with this and more with the fundamentals it could have resulted in a far better version of this film.

On the whole Axe is one of those B-grade straight to VHS movies which would have faded quickly into obscurity, only to be sought out solely by hardcore trash aficionados , had it not been banned. Unwittingly the BBFC gave this much more publicity than it deserved. Exactly why it was banned is a complete mystery given that most of the action occurs off-screen, and some of the potential darker elements are left completely unexplored. How they managed to get 19 cuts from the edited version baffles me to no end. All this said though I did enjoy it on a mildly distracting level and for fans of low-grade 70’s trash there may be some appeal.  It is not for everyone though and if you are looking for graphic gore and a similar storyline you would be better off seeking out some of the other banned titles such as Last House on the Left or I Spit on Your Grave for much better examples of a rape/revenge story.