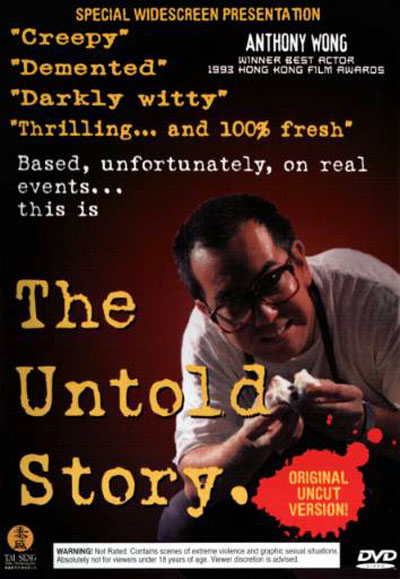 Lovers of Hong Kong Category 3 cinema will be familiar with this gory masterpiece (Category 3 being the Hong Kong equivalent of a UK 18 rating for sex and violence). The Untold Story (1993), affectionately known to fans as “Bunman” although never released under this title, marks director Herman Yau’s debut into horror/thriller territory and was also his first collaboration with actor Anthony Wong who went on to star in some of Yau’s finest and most interesting films such as the excellent Taxi Hunter and Ebola Syndrome. Yau discovered a fondness for the horror genre and was also responsible for directing the popular ghost/comedy film Troublesome Night and several of its sequels.

The Untold Story is reportedly based on a true murder case from 1985, although on researching the background I could find little reference to actual events, unlike Billy Tang’s feature film Dr.Lamb made the previous year which was actually based on real-life serial killer cab driver Lam Kor-wan, and is well documented.

Anthony Wong’s performance in The Untold Story was considered so convincing that he won Best Actor at the 1993 Hong Kong Film Awards for his efforts, and rightly so! You can see how Wong immersed himself completely in the character, getting his teeth into the role quite literally in one scene! The film established Wong as one of the finest actors in the Hong Kong movie industry. Fans of action films will remember him as the villain in John Woo’s heroic bloodshed epic Hard Boiled and he has appeared in more mainstream film fare such as The Medallion with Jackie Chan.

In The Untold Story Wong plays Wong Chi Hang, a creepy looking guy with shaven head and spectacles, owner of the Eight Immortals Restaurant in Macau. The police begin to suspect Wong is not all he seems after a bunch of dismembered body parts wash up on a beach and it becomes apparent that the previous restaurant owner Cheng Lam and his family have all mysteriously disappeared without trace. Danny Lee, who also acted as producer on The Untold Story, plays Inspector Lee leading a small team of young cops investigating the case. Interestingly this is a role Lee often played in numerous movies, having close ties with the Royal Hong Kong Police. Fans in the West will know him as a prolific actor in Hong Kong cinema,(most notably for his performance alongside Chow Yun-Fat in John Woo’s tremendous actioner The Killer). Here he plays a cheeky chap with a different prostitute ‘girlfriend’ on his arm in almost every scene, much to the amusement of his team who constantly jibe him and lust over his ‘hot’ dates. There is much humourous banter in the police station between the young cops, mostly in the form of sexual innuendo aimed at the only female cop on the team Bo played by Emily Kwan. Bo however has a feisty personality and gives as good as she gets always getting one up on her lecherous male colleagues.

In contrast to the humour there is plenty of disturbing violence and gore on offer during the menacing scenes when Wong appears onscreen. Wong is a sore loser and when one of his employees Ah Lun accuses him of cheating during a game of Mahjong we witness just what violence Wong is capable of, although strangely unlike many other films in the genre we are never shown what actually made this man become the way he his. I would guess this was deliberate, as Wong is a thoroughly nasty individual and any attempt to justify his behaviour and gain his character any kind of sympathy might’ve taken away some of the impact of his actions. Nosy restaurant waitress Pearl played by Julie Lee (star of one of Hong Kong’s few hardcore movies Trilogy Of Lust) becomes Wong’s next victim after he sees her blabbing to the police, and suffers one of the nastiest deaths I have seen involving a handful of chopsticks which I wont spoil for viewers who haven’t seen it by going into detail.

Wong is eventually arrested when police find incriminating evidence inside a dump truck. He is questioned and beaten but refuses to confess, insisting he was handed over the restaurant by Cheng Lam and that Lam and his family had emigrated to Canada. In an attempt to extract a confession and with fears over a scandal of police brutality Wong is sent to a prison where Cheng Poon the brother of missing restaurant owner Cheng Lam is serving time. The cops wait their moment in the hope that the severe beatings from the inmates will encourage Wong to confess his crimes. After Wong is beaten we witness him asking another prisoner to give him his urine to drink claiming that it will cure his internal injuries to which the fellow con replies ‘have you lost your mind?’. This is nothing compared to what he does next in a clever suicide attempt to get himself released into a hospital facility under police custody. Here we discover that the Hong Kong authorities have been after Wong for the murder of a guy who was burnt to death in Hong Kong years earlier but Wong had managed to escape their radar by fleeing to Macau. They want the Macau police to hand him back for trial but the stubborn Inspector Lee refuses to turn him over until he admits to the crimes he’s committed whilst on Macau soil. Cue some of the most bizarre interrogation methods used to extract Wong’s confession, which are rather unique to say the least, and you will have to watch the movie to see what I mean! All I can say is that if the cops in Macau are really like this then you wouldn’t want to do anything that might piss them off! 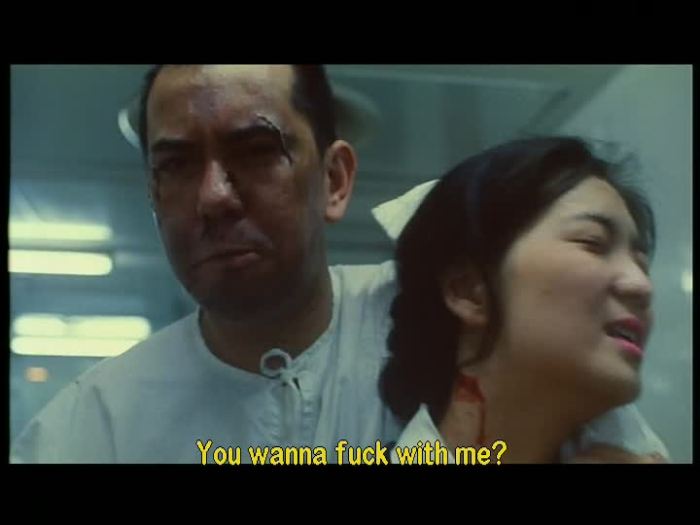 As Wong tells the cops everything we witness in flashback the massacre of Cheng Lam’s entire family and this scene is particularly gruelling, ultra-gory and certainly not something you would ever be likely to see in a Western film. Be warned, not for the faint-hearted or easily offended it is quite possibly one of the bloodiest and strongest scenes you’ll see in any movie. Oh, and not forgetting the magic moment when the cops finally realise what the secret ingredient is in his delicious barbecue pork buns, as if you couldn’t guess! Thankfully I am already a vegetarian otherwise this film would’ve put me off meat for life!

Some in the West may criticise the sick humour in The Untold Story and consider it an exercise in bad taste, however having been a fan of Category 3 movies for many years and viewed many titles it does become apparent that this is normal and acceptable in Hong Kong cinema, dark twisted humour is a running theme throughout these movies and is deeply rooted in the culture. If you like this kind of humour, and personally I do, then you will love The Untold Story, however it may be too much for some people to stomach. Nevertheless, The Untold Story is a very well made shocker and is certainly a cut above many other Category 3 exploitation movies of the time. It is well shot with excellent set pieces, plenty of tension, gross-out scenes and the restaurant interiors look more like a bloody abattoir than a kitchen.  It is also an intelligent character study of a psychopathic mind brilliantly played by Anthony Wong, and if you are looking for something different to mainstream horror then I would strongly recommend checking this movie out as it contains more guts, violence and meat cleaver mayhem than you can shake a bloody chopstick at and remains a firm favourite of gore buffs and aficionados of extreme Asian cinema.

Two sequels of sorts were made, the first in 1998,obviously to cash in on the success of the first film, but both bared little resemblance to the original and the less said about those the better. The same can be said about later imitations with such lurid titles as Bloody Buns, Human Pork Chop and There Is A Secret In My Soup, while some were mildly entertaining most were forgettable. A more befitting sequel would’ve been Yau’s own Ebola Syndrome (1996) which saw Anthony Wong deliver yet another stunning and demented performance. Sadly, this pretty much ended the golden era of Cat 3 cinema with the hand-over back to Hong Kong just a year later. 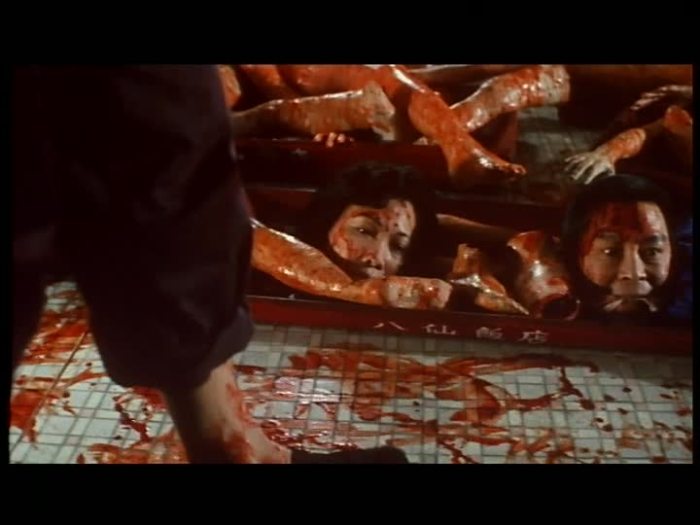 The Untold Story was cut by the censors on its first DVD release in Hong Kong and several gory scenes removed. It seems they thought it was too strong for even Asian audiences. It was released uncut on DVD by Tai-Seng Marketing label in the USA making this disc a much sought after item by collectors.