Citadel has provided a bit of a challenge in preparing for my review mainly because it is completely not how I expected it to be from the trailer, and so I have been trying to collect my thoughts on it since watching. The film has been on my ‘To view’ list for quite a while now but as the promotional material made it look a bit heavy going I had to wait until I was in the right mood to sit down and watch it.  It was definitely thought-provoking, but on balance I felt some of the supernatural elements did not pack the same punch as the more reality based horror portrayed within. The film is a debut attempt by Irish director Ciaran Foy which was filmed almost entirely on location on the run down estates of Glasgow, although the film takes place in a fictional part of Ireland, but the stark backdrop of this dilapidated concrete jungle provides the perfect centre for the horror to unfold, and also gives the piece a distinctly British feel. Foy based the film on his very real experience of being attacked by a group of hoodies wielding a dirty syringe as a weapon, which left him with crippling agoraphobia.

The story begins when Tommy and his heavily pregnant girlfriend Joanne are about to move out of their tower block flat and on leaving are confronted by a bunch of young thuggish feral children sporting hoodies who leave Joanne in a coma after attacking her, from which she never awakens. The baby is delivered and Tommy is left to bring up the child alone, and suffers intense feelings of anxiety after the attack which renders him unable to leave his home. He receives therapy for his agoraphobia, but after Joanne dies he encounters a rowdy Priest (James Cosmo) at the funeral and his charge a young blind boy named Danny, who warns him that the hoodlums will be coming for Tommy’s child. What ensues is a sometimes chaotic and tense ride of psychological horror.

The first thing to say about this film is the aspects of agoraphobia are played out superbly as the narrative starts to develop. We see Tommy left housebound, lonely and desperate, confused, unable to bond with his child and grieving for his girlfriend. The use of camera angles and the striking desolate locations convey a sense of claustrophobia and hopelessness and there is a distinct sense of depression which underpins the whole film. This works perfectly and the first hour is tense, thrilling and draws you in. The word Citadel means a fortress which is put up around a town to protect it, and this is exactly what Tommy does, builds his own Citadel through his fear, through his lack of interaction with the outside world. However I felt that as the story develops the certain supernatural aspects which become introduced start to veer the movie off course a little. There are some jump shocks contained which are effective and not too predictable, and the very real horror of Tommy’s situation is at times brilliantly suffocating. Without ruining things as I don’t want to go into too much detail, and I am sure there are some who will enjoy the later elements of the story, it does at times enter the realm of the fantastical which somewhat undermines the real edge of psychological themes at the beginning. I think this is partly because as the start of the film is so successful in keeping you on the edge of your seat the events which ensue start to get so unbelievable that, for me anyway, it just left me shaking my head and wondering what exactly was going on. Now don’t get me wrong I am not always looking for realism in my horror (just check some of my other reviews for reference) but I found this change of pace and direction was perhaps a little bit misguided on the director’s part. 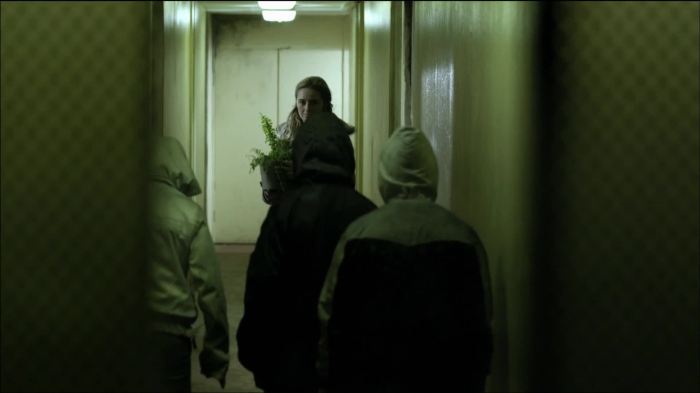 For a low budget film the acting stands out as above par for a movie of this type. Welsh actor Aneurin Barnard is fantastic in the role of Tommy (although he does bear more than a passing resemblance to Elijah Wood, on the basis of which someone had added the comment on the Youtube trailer link for Citadel ‘bunch of Smeagols looking for Frodo’). If you can get past that aspect though and he is fantastically frail and desperate in his portrayal of this lonely and confused father trying to protect his child and cope with the devasting events of his recent past. Game of Thrones James Cosmo as the expletive yelling less than empathetic Priest dominates in his scenes and provides the perfect counterpart to the small and sickly Barnard. Child actor Jake Wilson as the blind boy Danny puts in a convincing effort for someone so young, and there is a solid supporting role for Wunmi Mosaku as nurse Marie. 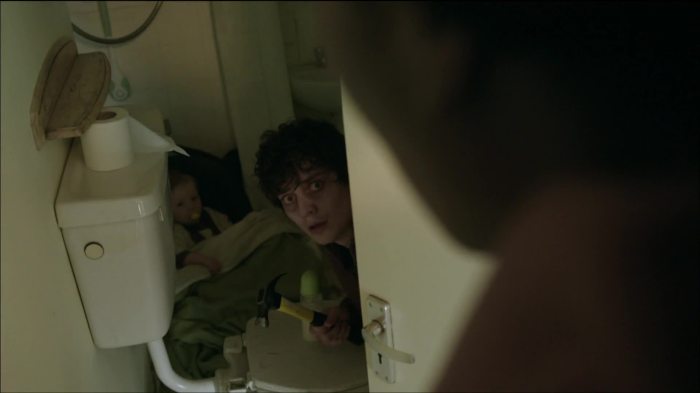 There are some great set pieces worth mentioning in this film the first one being the opening scene when Joanne is attacked which just grabs your attention right away. There is also the night after the funeral when Tommy is left alone and threatened in his home, unable to venture outside to catch a bus, as would be attackers attempt to smash their way in. Also worth a mention is another seriously tense scene where Tommy and Marie are confronted in an underground passage. It was moments like these that despite the misgivings I had for the film, which I have already mentioned, Citadel overall was a better than average effort. The use of innercity crime and feral children as a premise for horror was original and well thought out, and by combining his real life experiences as the basis for the story I felt some aspects of this film were convincingly terrifying. Foy’s choice of a condemned council estate as the location worked well to present this landscape of desolation, crumbling tower blocks with their urine soaked stair wells, boarded up homes, a broken community with no one left who cares provided a perfect base for some elements of the story to really get under your skin.

So there we have it, not a bad directorial debut for Ciaran Foy, on the plus side some pretty solid performances, great locations, and convincing aspects of terror, sadly let down from being brilliant by the more ludicrious elements of the story introduced toward the end, but despite this does have some scary moments.