All girl band Vicious Lips have just been given the gig that could break them into stardom, there are just two problems, their lead singer is dead, and the venue is on the other side of the galaxy. Cue new singer Judy Jetson, and a stolen spaceship to solve their problems. As they race across outer space will they make it in time?

I am going to begin with a confession, I have seen some pretty dire films in my lifetime, some insanely downright awful films even. Being the eternal optimist I always strive to find something to like about a movie, in fact I would have to say I usually love the bad ones the best (especially if they contain copious amounts of unintentional comedy). In the case of Vicious Lips however I am very sad to say I could find very little to like, this has to be one of the most irredeemable films I have ever seen. What makes it even more of a travesty is the fact it could have been so good, which seems the general lament of most other reviewers. Amongst the few people who have seen this film, and seen fit to spend time reviewing it, there is the odd person who thought it was the best thing since sliced bread ( ‘odd’ being the operative word here), I am going to have to suggest they were on drugs when they watched it because that certainly was not the experience I had, and I find their enthusiam mindboggling.

I was lured in by a couple of things, firstly it is rare, I took this somewhat wrongly to suggest some sort of Holy Grail cult status. I have however since watching it discovered there is a very good reason this faded into obscurity, it is because no one wants to see it! Then there was the person who hyped this up into a completely different film evoking visions of an attitude filled all girl punk rock band marauding around space like a bunch of intergalactic pirates, shame on you that person! None of that happened in this film, because the sad fact is NOTHING happens in this film, apart from the first twenty minutes which is quite good, then it sort of shrivels like a limp lettuce leaf left on the salad bar too long.

As the movie begins you are coaxed into a false sense of security, we are introduced to a girl band, they seem quite seething and bitchy (this is before they get on stage and start making music) and then their lead singer dies in a bizarre road accident sort of thing. The manager gets the dream gig of a lifetime if they can make it in time, this venue just so happens to be on the other side of the galaxy, and of course they are a member down. So like all good coincidences in film land  they stumble upon a new singer at a talent contest and steal a spaceship with a psychokiller Venusian beast on board. All good so far, during this time we are greeted with the following, nice neon (albeit cheap) looking sets, someone getting their eye gouged out, a three boobed woman and some big, big 80’s hair on the girls, which look like the worst wigs ever fashioned by man (and for that reason I loved it). Then the band come on, the band someone on IMdB, I think it was, described as being like tear away 90’s act L7. This is when the malaise started because they are nothing like this and really just a terrible power ballad band in the vein of Heart (music provided by Drock whoever they were). The songs seem to go on forever as well, which only adds to the annoyance factor, although if you like that sort of thing I would imagine you would be in your element. The only saving grace are the bizarre instruments they play with little lights on them which manage to in some part exude 80’s futuristic style like a cheesy pop video.

As soon as the girls enter the ship the entire thing goes pear-shaped and the plot loses momentum. It seems that once the vessel crashes then the coma inducing abyss of nothing really occurring begins. The manager staggers out into the desert to be picked up by naked fembots, which is not explained but provides a smidgen of nudity, while the band are left alone to bitch amongst themselves, take drugs, and whine on about their crows feet. Here is where the ineptitude of the acting really kicks in, because these girls have all the attitude of a lump of coal. Lead actress Dru-Anne Perry as Judy Jetson (acting portfolio of 3  projects including this) really shows her inexperience in these scenes, as most of the focus is on her, and as the girls cat fight amongst each other it is not very convincing and starts to grate. Of course we have to remember there is a psychokiller onboard and things could at any moment move up a notch, and do they? Well… no. The beast does however have the most amazingly ridiculous makeup effects, but that is about the only purpose he serves, a walking special effect, and not a good one at that. What makes this even more tedious are the random attempts to stick some tongue in cheek humour into the mix, which comes off as trying too hard and not very funny.

For the third part of the film it then breaks down into surrealism, with a set of strange sequences, which do get explained at the end. This includes a set of Mad Max type cannibals, believe me this sounds  a lot better on paper as does the rest of the plot, because in keeping with the majority of the running time again nothing comes of them. As Judy Jetson runs through a series of derelict rooms, encountering a number of potential threats, the floating net curtain which adorns the set makes the whole thing seem like a seriously bad 80’s pop video. Of course there is the end, the biggest ‘how the hell do we wrap this up? Ok just go with that’ anti-climax, with a obligitory montage (which happened to be about the best thing that occurred in the film).  I only have myself to blame, I had felt seeing as I had invested an hour or so of my life that I will never get back that there may be some sort of pay off at the end, I should have known better.

The director Albert Pyun (Cyborg, Sword and the Sorcerer, Kickboxer 4) seems to have been going for some big 80’s style statement here, and while some of the elements are there, and the story shows potential, the lack of decent scripting and budget restraints mean that he really misses the mark with this one. I could go into more detail about the cast and the production on this one but I do not feel this movie really deserves a detailed analysis. Best avoided, no decent gore or nudity to save it, and excruciatingly boring, which incidentally makes Luigi Cozzi’s Starcrash look like a masterpiece in comparison (at least that is not boring). For a much better example of a film which mixes punk music with science fiction elements (and that is not suggesting that the music in Vicious Lips is remotely punk as a few people have wrongly surmised on review sites), then check out Japanese classic and cyberpunk forerunner Burst City (Bakuretsu Toshi) (1982).

No Trailer but here is an awful hair ballad to give you an idea. 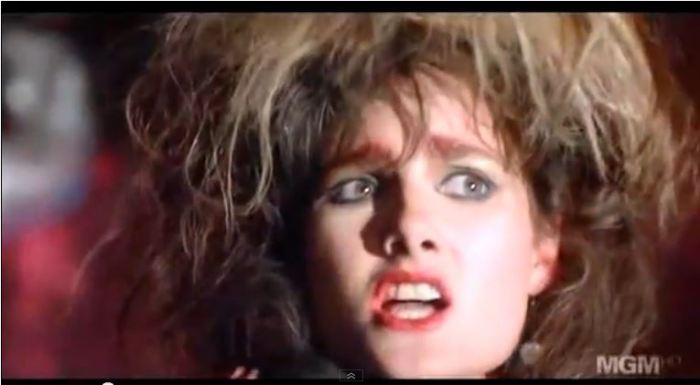 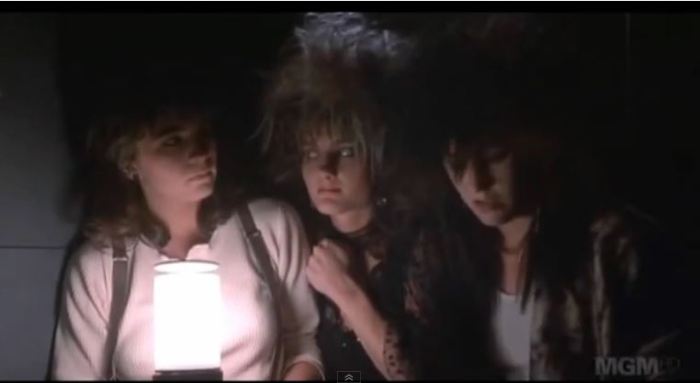