Over at The Gore Splattered Corner we like our music as brutal as we like our films, and one thing that is certain when it comes to  US death metal /grindcore band Cattle Decapitation, they are are nothing but brutal, and then some.

After starting up in 1996 the San Diego based band have always been happy to court controversy. Their pro-vegetarian lyrics and song titles flying strictly close to the knuckle- “A Living, Breathing Piece of Defecating Meat”, “Bovine, Swine, and Human-Rinds”, “The Regurgitation of Corpses”- flaunting traditional grindcore/ death values, this is one outfit that isn’t ready to compromise on their central message. Current members Travis Ryan (vocals), Josh Elmore (guitar), Dave McGraw (drums), and Derek Engemann (bass guitar) continue the band’s ethical stand of promoting animal rights while highlighting the sadistic side of humanity through their musical message.

This said, the lyrical content tends to pale in comparison to some of the responses evoked by the band’s  graphic album art. The 2002 album To Serve Man- which depicts a semi carved man with pieces of his body marked up like a butchers chart- outraged German distribution company SPV  who consequently refused to touch it. Adding to this in 2004 the cover to Humanure – containing the joyous image of  a cow shitting out grotesque half-digested human remains- was censored and changed after stores refused to display it for customers in its original form.

Cattle Decapitation remain unrepentant. Their last album, and 6th studio effort,  the 2012 release Monolith of Humanity is no exception; demonstrating the band aren’t backing down and will continue to do things on their own terms despite their continuing success. This was demonstrated perfectly with the release of the video for the single Forced Gender Reassignment last year. Video streaming sites refused to host it due to the graphic nature of its content, that is until horror site Bloody Disgusting stepped in to home it; thus ensuring fans could get to see the piece in its full uncut gory glory. This aside, the video carries a deep message about humanity, making it a bleak and visceral experience to behold. An uncomfortable watch, maybe, but a deep and thought provking one nevertheless. 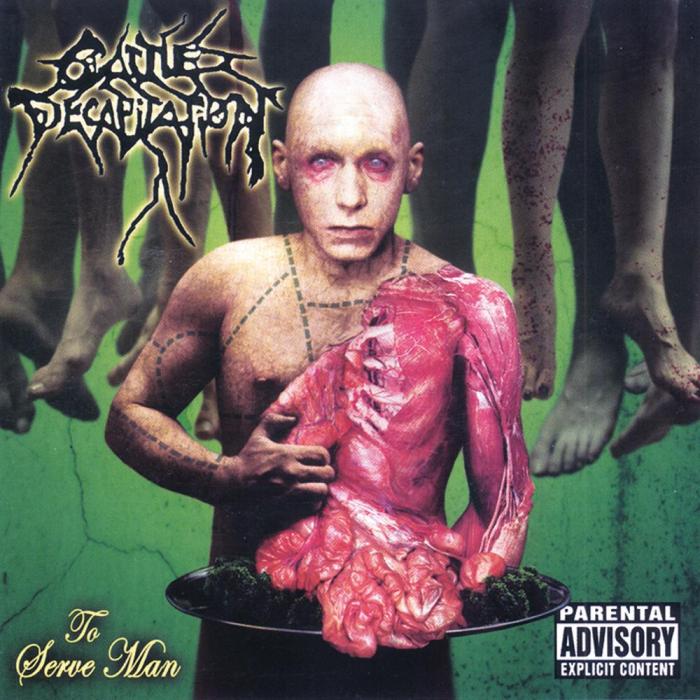 The Gore Splattered Corner caught up with Travis taking a break after their recent Summer Slaughter Tour, and we would like to thank him for taking the time to do this interview with us.

Could you explain a bit about your musical message, and also your pro animal rights stance?

Travis- Honestly, any message has been even less metal than people probably think.. I feel it promotes personal responsibility and acknowledgement that we’re not the only beings on the planet whether you choose to care or not. Its about as hewn into the music, lyrics and imagery as, say, the likes of Nuclear Assault, Megadeth or very early Carcass. Humans will forever need being taken down a notch.

Do you think your music has inspired awareness around the issue of animal cruelty?

Travis-  I think as long as there’s an open discussion that’s a huge plus. People are too quick to judge and dismiss the band or the lyrics entirely based on their previous experience with animal rights advocates to vegans to simple vegetarians. I do see a lot of talking about the subject and I even see people by the droves act towards us as if they’re “coming out of the meat closet” and confide in us their true feelings on the subject. I think most people love animals and the idea that there are these different creatures amongst us. If you don’t, that’s fine. If you hate animals or just want to kill them for the sake of doing so, you’re just an asshole or a serious weirdo. Period, no real way around that one.

What would you say your main musical inspirations have been over the years?

Travis- Probably being tired of the same ol’ same ol’. Seeing what others are doing and staying away from it. The idea of following our own path and creating something new. I honestly can’t think of any “musical” inspirations for any one given member of the band’s input. If anything, most of the band is into black metal, technical music of a different variety than what everyone seems to be jizzing all over as of late.

Have you ever been forced to compromise in anything the band has put out? Some of your album covers have caused a bit of a stir, could you tell me a bit about that?

Travis- We had issues with the Humanure cover. The “compromise” was a miserable failure and everyone involved realizes that now, especially the label. Apparently it was hard to sell a cover that had nothing on it, (laughs). Oh well, we moved on. Our album covers I feel are as tame as they come, always have been. They go more for function over form and they’re brutal in their own right. Not the goriest thing in the world but there’s lots of stuff to talk about and our lyrics and covers do that, whether there’s gore on the cover or not. If you ask me, the cover of the Harvest Floor is one of the more offensive covers we’ve done. I mean, that’s happened before in history to certain races of people. But in our case, its not race sensitive, its the destruction of all humans via the means we’ve been doing to animals since the advent of factory farming. Nobody even seemed to notice, which I find rather disturbing.

What was the concept behind the video for Forced Gender Reassignment ?

Travis- I told the director “put the lyrics on the screen” but not in those stupid lyric videos sense. I wanted it acted out. Truly, without flinching, with no censor. Its supposed to be humiliating and unfortunate for those who feel they know what’s right for people. Its blatant revenge against those who refuse to mind their own fucking business. The video was shot and directed by Mitch Massie in Evansville, IN. We are not necessarily gore fans as far as movies and shit go. I’ve personally seen everything I feel there is to see and don’t really care to watch gory videos or anything like that anymore, not like when I was a kid or in high school. Not much shocks me anymore as far as videos, pictures, etc. Life sucks enough, I don’t need to be reminded constantly of how I might possibly die one day. Again, I’ve really truly seen it all I feel and have marinated in gore for many, many, many years. I turn 39 next week and although I love to gross people out and write the stuff, I don’t exactly sit around reveling in it all day. None of us do or ever have, really.

Do you think the controversy over the video helped gain attention?

Travis-  Sure that helped. The label didn’t want to touch it, that kinda was a bummer but understandable. The only reason Bloody Disgusting even hosted it was because it had some sort of message in it. Had it been just face value as a gore flick, they wouldn’t have come close. Sure we got backlash. I personally had a couple of fans email me directly freaking out on us wondering why we would do something so “pointless” and calling us try hards if it in fact did have some sort of “weak message” attached to it. Point blank… the band is called Cattle Decapitation. The song is called “Forced Gender Reassignment”. The band has been called “death metal”, “grind core”, “gore grind” and “death grind” for the entire 17 or so years we’ve been a band. What the fuck did you expect? We’ve always been a very tongue in cheek band. We took the gauntlet, threw it down, said “fuck it” and went for the jugular. There’s no time to waste in music like this.

Your last album Monolith of Inhumanity gathered mostly  positive reviews, how do you intend to follow up on that? Do you have any recording plans for the coming year?

Travis- We just started writing when we got home from the Summer Slaughter Tour. Its coming along slowly because of work schedules and we’ll be working on it for over the next year or a little more as we’ll be doing one or two little tour things sometime later next year. For now, just working on the next one. I heard a run through of the first new song other night. Two words “Holy Fuck”. Still got it… 😉

What are some of your highlights over the years?

Travis- AUSTRALIA, funny moments with the tour manager/soundguy in Europe, some killer massive fests.. stuff like that.

Finally what is the craziest situation the band has ever found themselves in?

Travis- I don’t know.. so much shit has happened over the last decade of constant touring. How about I mention the FIRST weird thing ever that happened to us… We were in Austin on tour with Gwar for our first US tour ever. Gwar fans hate everyone. So we were pleasantly surprised when this dude bought our shirt and CD and came up to us to express how big of a fan he was. We hadn’t had that much of that on this tour because we were kinda new to the actual metal scene and we were on tour with a band that ALL the people there only care about seeing them. So it was cool to have someone chatting us up, etc, being all fanboy on us. Someone asked him if he had any weed and he said no but he was looking for some. Well, somehow he got it in his mind that we had weed and were holding out on him. The drunker he got, the weirder he got and it finally got to the point where he was basically like “Look dude, I know you guys have weed, where is it? Hook me up man, come on”. He then proceeded to follow me and the drummer around ALL NIGHT and getting really fucking shady about prizing some weed out of us that we didn’t have. It was fucking WEIRD, may not sound like much but the dude got really fuckin bizarre about it, throwing tantrums, yelling at us! All the while he’s wearing our shirt and holding our CD and it just made us feel super weird so we somehow just bailed the second he wasn’t looking. I remember him saying shit like “don’t you leave me! Don’t you fucking punk out on me!!!!!!!” Dude, I don’t care what people like that think of us. I write songs about people like them. FUCK OFF!

For news and info check out the Official Cattle Decapitation site here.