Demented housewife Jane likes to leave her kids with the gardener and slip off to her secret pad on the other side of the city for some afternoon delight with lover Fred, however her surly (secret cigarette puffing) daughter has other ideas. When her mother rebuffs her phone calls to the apartment and after letting her down on a promised cinema outing she does what all great cinematic spoilt brats do and drowns her little brother in the tub (OK no one does that, ever, apart from in this film). Things get even worse for Jane though after rushing home when being informed of the incident, with Fred at the wheel, her screeching and wailing in the passenger seat makes him lose his bearings and he pummels straight into a nasty metal road barrier and literally loses his head, and I do mean literally. After spending a year in a mental facility Jane returns to set up residence at her former love pad, complete with blind and love-struck landlord Robert who takes pity on her and shortly after re-joining society she tries to reignite her former passionate affair with Fred; there is a problem with this however, he is dead.

So begins Lamberto Bava’s directorial feature debut (however he had already had plenty of practice working alongside his father Mario) with this little piece of early 80’s nonsense, a jewel in the crown of dark horror comedy. I am tagging this comedy because if you go into this expecting anything serious you are going to be bitterly disappointed; if you can let the completely farcical plot structure, silly lines, camp dubbing (complete with awful New Orleans accents) and sheer lunacy , then you are going to be in for an extremely entertaining time. Lamberto of course went on to make one of the crème de la crème cult horror films of the 80’s Demons; being every bit as silly, and camp as Macabre, just in very different ways. This, his first effort, shows a flash of the imagination that was to come later on, and while more low-key is every bit as enjoyable if you accept there is no high octane action or 80’s metal on offer, nor is there much in the way of gore or special effects to speak of. Macabre relies mainly on atmosphere and suggestion to hammer home its message, and what a spectacular message it is at that.

For me I found Macabre to be all engrossing and imaginative, silly to the point of what the fuck is going on here, and it threw up many questions in the way the plot panned out, mainly to do with logistics. Not a lot is explained, and it doesn’t have to be, it just is and you just have to accept that. Of course there is plenty to help with that especially when it comes to the characters involved. Jane, what a horny type of woman she is, obsessed really is an understatement when it comes to poor old Fred and she even builds a strange little shrine to him complete with the photo of him in some sort of army uniform next to a peace pendant, (what does this mean? Well I think all we can take from this is she is completely mad). Bernice Stegers (Xtro) who plays Jane spends most of the time with her eyes literally popping out of her head she has it so bad, but then if we take her night-time pornesque wailings as cue it is safe to assume Fred was a man of special talents. Then there is  Stanko Molnar (who later appeared in Lamberto’s A Blade in the Dark) as the blind landlord Robert, another interesting character who is busy establishing a life of his own after the recent death of his mother; you cannot blame him for wanting to move on, the old bag really did him no favours, treating him like a child, inviting strange women in for a chat while he is sat naked in the bath in front of them etc… etc… The poor guy has obviously never been laid and now he has this half naked nymphoid living upstairs, he really wants to get in on the action; not that he can appreciate the nakedness being blind and all that. But Jane does provide him with other forms of erotic entertainment as he is treated nightly to her overly loud moaning in ecstasy, just who is up there with her? Well not him that’s for sure, and that is something he wants to rectify with his constant invitations to Jane to dine with him from his grotty kitchen.  Of course special mention has to go to Veronica Zinny as spoilt brat daughter Lucy who has the most amazingly awful dubbed voice and is a completely precocious turd (not surprising given her mother is concerned mostly with sex with men other than her father and nothing else), the few scenes she is in are dominated by her surly face and bratish behaviour that it becomes obvious why Jane doesn’t want to spend any quality time with the kid.

Given that Lamberto had a lot to live up to here with his father Mario being a pioneer in Italian, and horror cinema, and of course his grandfather Eugenio before that, it’s great to see he just does his own thing. There is no attempt to capture the tense gothic mood that his father became so famous for, nor does he opt for a giallo/chiller approach, or use mood lighting, or anything else that is overtly ‘Bava’ for that matter, he does things completely on his own terms. While there is a distinct difference there is still that good old family excellence at play with Macabre, the film overall having great production values for a low-budget piece. Bava makes fantastic use of exterior location shots of the house and in and around the city to establish the setting, and of course the grandiose interiors of the old school Southern abode where the main protagonists are mainly based throughout the story. Special attention is paid to the wrought iron railings and staircase which separate Jane’s apartment from Robert’s living quarters, and we see a lot of focus spent on this no man’s land between the two inhabitant’s lives. Robert, usually stood at the bottom of the stairs listening in to Jane’s private moments, gradually gets dragged further and further into her world, and in turn closer to her apartment and the ultimate truth. Alongside this there is a wonderful blend of sleaze and tension built into the soundtrack which really does help bring everything together, even if some of the ‘tense’ music sounds a little bit like the Psycho theme at certain points.

It is fair to say that the silly tone of the film is going to put some of the ‘I like my horror serious and scary’ types off, being neither remotely scary nor serious. For lovers of 80’s trash, of fun, for those who like to see some imagination and novelty in a horror film then I will recommend this without hesitation, a fabulous distraction and great debut from Lamberto Bava. 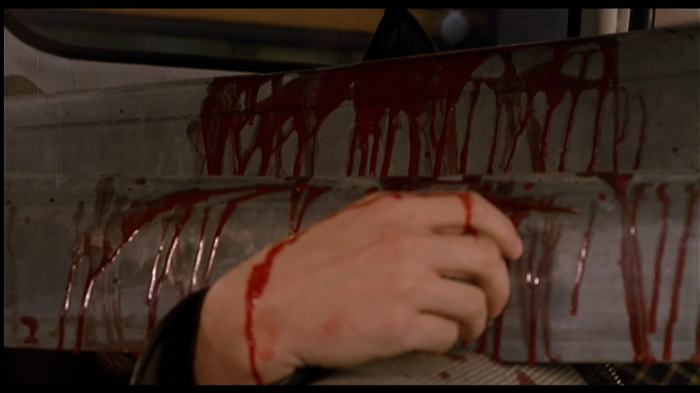 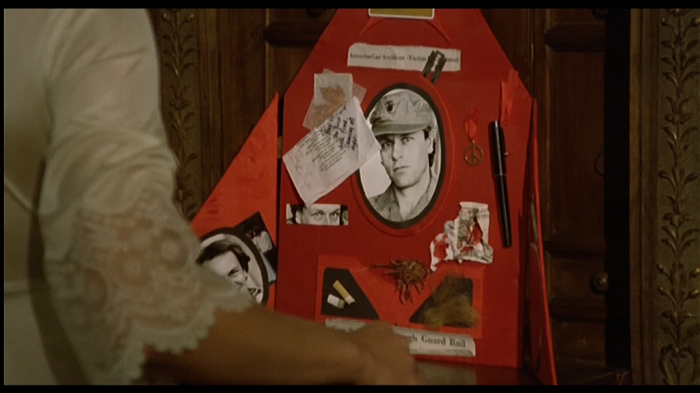 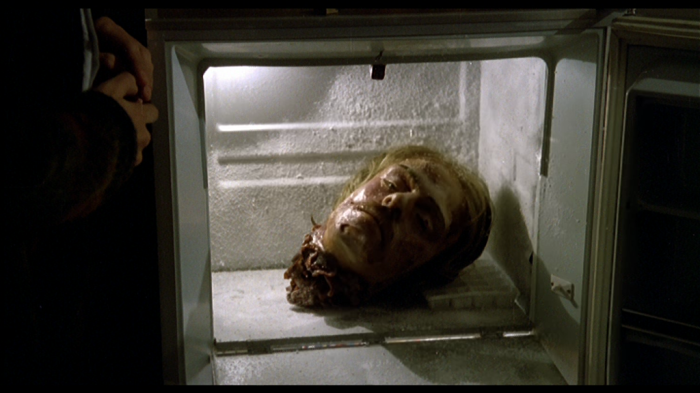 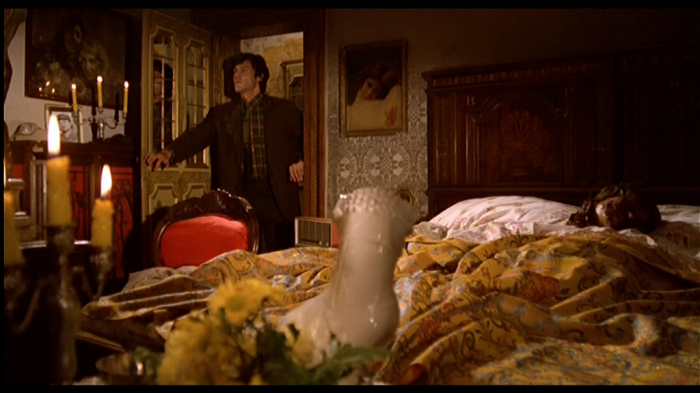