Giulio Berruti’s The Killer Nun is a film which seems to evoke mixed reactions, polarising viewers into a love/hate situation, and on further investigation it would seem the cause of this is down to one thing, the title. To twin the words killer and nun together purveys that this film contains a crazy nun slaughtering people, and it does, but only to a point. The film is a lot more than that, and plays out in a very different way than the title would have you believe, it differs from the usual nunsploitation fodder, and pans out more like a giallo than anything else. Equally misleading is the fact this film was once banned in the UK, being one of the films on the DPP Video Nasty list, and you would think that the reason for this would be down to some sincerely blasphemous filth contained therein. But as in many of the cases of the video nasty titles, it would seem that again it may have been the title alone that secured its place; The Killer Nun being neither shocking, filthy nor blasphemous on any overt level.

Nunsploitation is a funny little subgenre, there is a great appeal in seeing nuns doing bad things, and this is mirrored in porn with similar themes remaining popular in the adult entertainment industry. People tend to enjoy seeing nuns having sex, nuns killing people, nuns cavorting in lesbian romps, and I guess it is the off limits, and extra level of juiciness which adds an edge to the enjoyment factor. While many nunsploitation films focus on religion as a cornerstone to sadistic behaviour, the mixing of religious icons amongst the sleazy elements, and the relationship of religion and sex, The Killer Nun strays from this greatly, being neither set in a religious location, and having only mild dabblings with these themes, and so as a pure example of nunsploitation it fails badly. If you view it with this in mind, and ignore the fact that is has anything to do with nuns it works both on the level of a giallo, and a slasher, and provides a relatively entertaining murder/mystery type affair, with some nice killings.

Reviewing from the Shameless (UK) release which boasts the tagline ‘at last the slut is uncut’, this particular DVD features a small interview with the star of the show Anita Ekberg, who plays the lead role of Sister Gertrude. The Swedish actress, sex symbol and pin-up, who once starred in Fellini’s La Dolce Vita and worked with the likes of Dean Martin, Audrey Hepburn and Bob Hope, was 47 when she appeared in this murky piece of cinema, and the role came at the latter end of a lengthy and once prosperous career. Anita, who only admits to seeing The Killer Nun once, speaks candidly in the interview, lamenting that the makers decided to dub her thick foreign accent with someone English, and therefore she does not appear to hold the role which much regard (although she seems happy enough to discuss it as part of the special features for this release). It is amusing though how she justifies her decision to take the part given she thought it would be a challenge, as if economic reasons did not come into it. Whatever Anita’s intentions, and regardless of the fact she is fairly well past her prime in The Killer Nun, one thing that can be said however is she puts in a commanding performance as the angst ridden Sister Gertrude.

The film accounts the descent into psychosis of Sister Gertrude (Ekberg), who following brain surgery for cancer is plagued with paralysing headaches, blackouts and violent outbursts. Sister Gertrude is in charge of a mental facility, and after resuming her duties worries that her recent illness has rendered her unable to do her job properly. Gertrude implores the facility doctor Dr. Poirret  (Massimo Serato, Don’t Look Now) and Mother Superior (Alida Valli, Franju’s Eyes Without a Face, Bava’s Lisa and the Devil) to relieve her of her duties and admit her into hospital for observation, but both are reluctant and insist she is in good health. Unable to cope with the pain Sister Gertrude resorts to morphine abuse to cope with the headaches, which only seems to make things worse, and during her blackouts patients are getting murdered in violent ways.

As I have previously mentioned The Killer Nun has failed to meet the expectations of some in that it has relatively little to do with religion or nuns. Sister Gertrude could for all intents and purposes just be a hospital warden or head nurse, like Nurse Ratchett in One Flew Over the Cuckoo’s Nest. The fact that she wears a white nun’s attire bears no relevance to the plot, and her ‘condition’ or actions are not motivated by any sort of connection to religious belief. In fact it would seem the makers have just slotted this whole ‘nun’ idea in just to fit it into the genre which at the time was making money. All this aside it does make for an absorbing and dramatic film if you let it, the way in which the killings occur are innovative and when twinned with the bland white colour palette of the sanitised hospital location, the copious amounts of bright red blood serve to make a bold contrast. The killings are well executed and imaginative and some particular favourites of mine included someone getting their head smashed in with a lamp before being thrown out of the window, and another patient being tortured with pins in her eyes before being strung up. Director Berruti directed only one other film apart from this, an obscure Italian sex comedy called Noi Siam Come Le Lucciole (1976), but interestingly he also served as Assistant Director on Corrado Farina’s eye popping, 1973 cinematic feast Baba Yaga (which he also edited and wrote part of the screenplay) as well as writing Farina’s earlier film Hanno Cambiato Faccia (They Have Changed Faces,1971).

As Sister Gertrude continues down her spiral of drug abuse her behaviour becomes more erratic, she starts to abuse the patients, lies, provokes sexual liaisons, and slowly loses control. As the patients start to die she becomes more and more frustrated, unable to remember, but concerned she may have had something to do with the deaths. In turn she becomes more insane, and it is during these points that the film is at its best. Anita Ekberg’s performance as this angst ridden nun, wringing her hands and contorting her facial expressions all adds to the mood perfectly, and the moments when she loses the plot, while not as shocking as they could be, definitely raises the level of the piece in terms of entertainment value. Surprisingly amongst the rest of the cast are some fairly well established actors, who have appeared in much better films, as well as those mentioned there is also a small role for Andy Warhol favourite Joe Dallesandro as Dr. Patrick Roland, as well as an appearance, though in a lesser role, by Lou Castel who played the lead in Giuseppe Vari’s 1972 part giallo part crime thriller Who Killed the Prosecutor and Why?

Being a nunsploitation there of course has to be an element of sexuality and this is provided two fold. First off we get to see Gertrude parading into town and picking up strange men while incognito in some borrowed clothes. Ekberg who remains covered up during this brief moment of sleaze is seen writhing in ecstasy while cavorting with a strange man in a hallway somewhere, which all seems a bit dirty (not in a good way). If we are to believe the dreamy look on her face during this 30 second wonder one can only conclude it has been a long time coming. Secondly Sister Gertrude’s much younger, and nubile roommate, Sister Mathias, (played by Paola Morra, Italian Playmate of the Month around the time this was made) has her sights set on her older mentor. While Ekberg again opts to have her modesty protected, Morra does provide a few scenes where she appears completely naked, including a sex scene with Dallesandro. The two Sisters also embark on an implied relationship which features some foreplay involving verbal humiliation and the wearing of stockings. I say implied because that is as far as it gets, the camera panning away and quickly slipping into another, unrelated scene before any action really gets going. However I can ensure any mood you may have managed to conjure up from this sparse offering of sleaze will be brutally crushed by the sight of an elderly wheelchair bound inmate  being humped cowgirl style (while still in his chair) by another bonkers patient ‘Florence’, as he jeers ‘ride it like a jockey on the home stretch!’- why the makers decided to leave this in but denied the viewers the opportunity of a sordid lesbian romp is anyone’s guess. Given the comedy angle of this particular scene it does work in favour of the film however.

On the whole The Killer Nun is a curious piece, engaging in its way, but let down by being marketed as a completely different film. If you view this with no expectations it could very well surprise you. A decent performance from Anita Ekberg, some welcome nudity from Paola Morra, and an interesting storyline, which provides a nice sting in its tail, The Killer Nun is a rewarding watch if you do not go into it expecting too much. 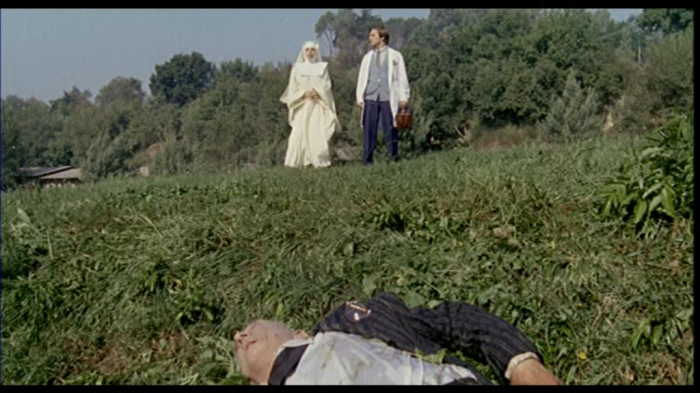 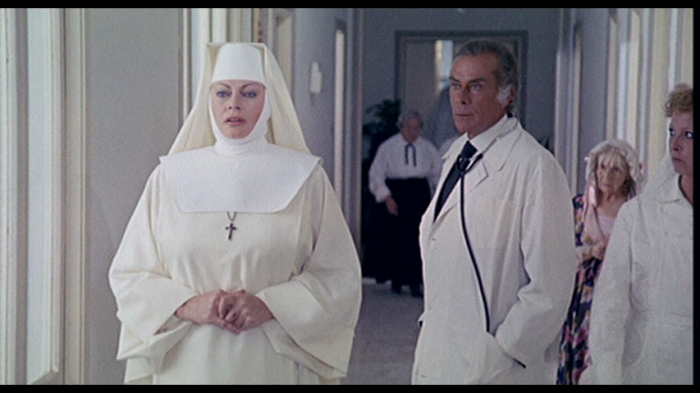