Bloodsucking Freaks opens with a woman strapped to a wooden chair and having a torture device attached to her hand before a metal rod is driven through her thumb, causing her to scream out loudly as her left hand becomes crimson. The scene then continues and we see an audience watching as the woman is tortured further. The audience applaud, calling it a magic show, some of them even saying it is a poor one. This is how we are introduced to Sardu (Seamus O’Brien), the master of the Theatre of the Macabre, and his dwarf sidekick and assistant Ralphus (Luis De Jesus).

Directed by New Yorker Joel M Reed, who also wrote the script in merely a day (Blood Bath, Night of the Zombies) and released through Troma, this 1976 horror film is one of those titles that has become a cult classic. Most of us are aware that a cult classic to one person is often a hot pile of garbage to another, and this film, like most Troma releases, has its fans and its critics and watching the film some 38 years since its initial release it is obvious to me why it has divided audiences over the years.

The premise of the film is pretty cut and dry and owes a huge debt to HG Lewis; borrowing heavily from Wizard of Gore (1970). Sardu wants to be immortalised through his work by mixing the art of torture and dance on the stage. He brainwashes, kidnaps and tortures as the plot moves along at a slow pace. The scenes of sadism are quite extensive but the gore, particularly now the tracking problems of VHS are gone, looks almost cartoon-like and overly bright. The blood is a pinkish red and is way too thin, but the scenes are still grotesque in concept and will certainly appease fans of gore-horror and exploitation. There are lots of scenes, whilst this simple plot proceeds, where we see lots of naked women being whipped, stabbed and cut to pieces.

It is a crazy film and it does catch the eye, but some scenes, such as the dwarf-sidekick Ralphus dancing around while throwing meat at a cage of cannibalistic nude women whilst bashing the bottom-end of a bucket like a drum, are almost weird for the sake of being weird. It feels, at times, like the creators of The Magic Roundabout decided to double their dose of acid and make a horror film.

Sadly, and adding a macabre feeling to the film, is the fact that Seamus O’Brein who plays Sardu was stabbed to death in his home during a robbery shortly after the completion of the film, having only acted in two features.

88 Films have released the so-called “Extreme Uncut Collector’s Edition” which features the uncut feature itself along with special extras such as interviews and commentaries. The cover-art of the release, underneath the lovely and bright slipcase that adorns it, is a wonderful and gory creation from artist Rick Melton. On the outside, this is a great looking release which even has a little booklet inside to flip through.

The outside of the packaging however is not what us horror fans are necessarily bothered about, we are here for the film itself, and the transfer of it on this particular release. The HD transfer here is grainy and with muted colour and scratches, something that does fit with this type of film but is not something that really belongs on a high definition release. It isn’t particularly bad but at the same time it is no better than a DVD release would be. The sound is decent and all but it feels a bit lazy to me.

The special features are okay, especially the audio commentary from Eli Roth which is entertaining, but more could have been put into the featurettes and they should be longer and more consequential. Still, it is more than we get with many releases, so as they say, some is better than nothing.

Overall I enjoyed Bloodsucking Freaks having only seen parts of it in the past and never having seen the uncut version before. There were times when I felt it dragged and that the scenes of torture were unnecessarily extensive. Still, there are likely no better versions of this film available and so it makes a purchase of this, if you are a fan of the film, or curious about it, worthwhile. If you are a fan of Troma’s usual output or like naked women being tortured in the name of theatre then you might just dig this film, but be aware that the acting performances are pretty bad, the gore is corny and the picture quality leaves much to be desired. Still, if you can look past that, you just might “scream your head off” with pleasure. 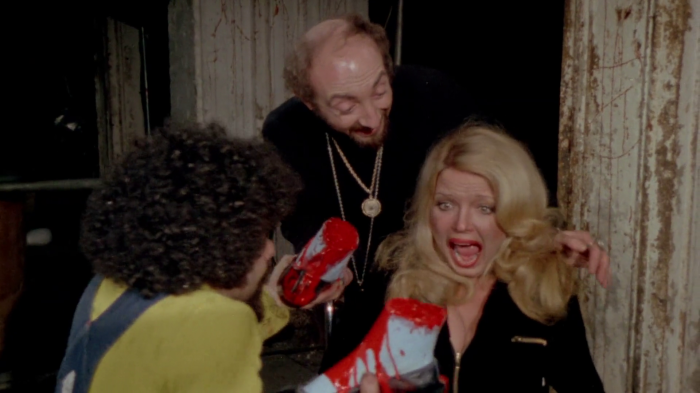