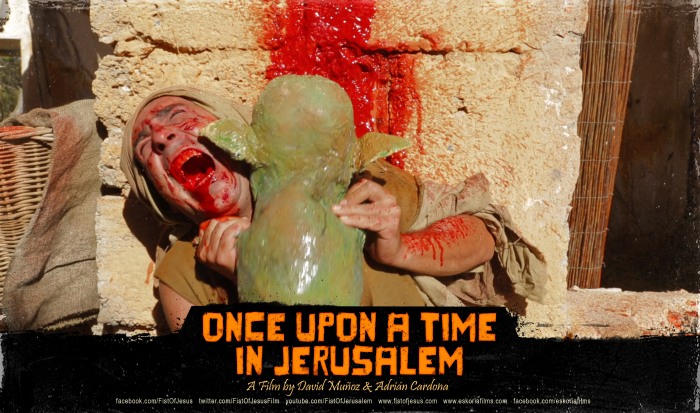 Fist of Jesus is one of the best short films I had seen in years, perhaps since Zombies and Cigarettes, a 2009 Spanish zombie short. And not only is this potentially the best short since then but it is also Spanish, surely evidence that there  is something in the water over there for innovative, fun, extremely high quality zombie fare.

Released in 2012, Fist of Jesus is an hilarious take on crazy zombie lore with Jesus kicking the shit of our Israelite zombies armed with not only fish but also many other, to be honest historically inaccuate weapons, causing an awful lot of gore and hilarity.

This film does not hold back with Swordfish having their name taken and used literally, heads being crushed and destroyed as we witness Jesus being a high-pitched screaming bad-ass killing machine.

Directed by the partnership of Adrián Cardona and David Muñoz, they go way past blasphemy and into the realms of insanity with this brilliant adventure, so check out the full fifteen minute movie below and prepare to taste the fist of Jesus.

I managed to catch up with the directors to find out more about their ideas, the feature length ‘Once Upon A Time in Jerusalem’ and the current indiegogo campaign. 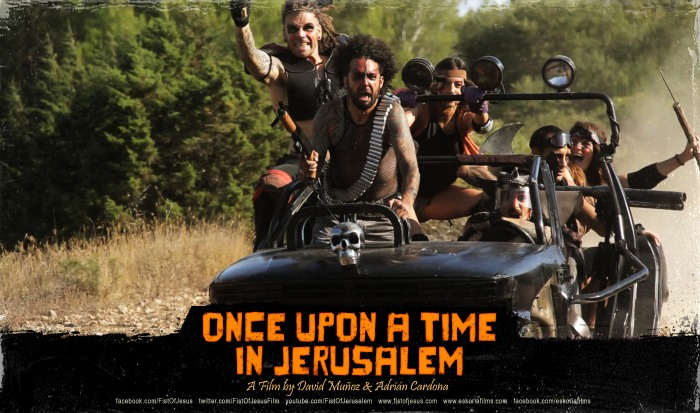 > How did you come up with the idea for Fist of Jesus and Once Upon A Time in Jerusalem?

David: The story starts a long time ago, when I was seven, we moved to another home and I also went to another school where we had religious classes, so I discovered all (of) the Bible universe. As I always get distracted and draw a lot, so several pictures that angered a lot of priest, were the beginning of Fist of Jesus. More than 20 years later I told Adrian about this idea that I’ve converted into a script and we started working on the short and the idea of the feature.

> Did you ever expect the short film to be so well received?

David: We know that we will have an audience as practically nobody is doing these kinds of films anymore and Brutal Relax was a hit on festivals. But we didn’t expect the short film to get so many awards and become so viral. By now, with these last two shorts we have more than 130 awards in the most important fantasy film festivals. Lots of them given by the audience. It’s a great help to encourage us in keep working, we did the short script and the feature at the same time, and the feature was the good one, so will be hard to do all the work that await us, but we’re sure audience will love it. 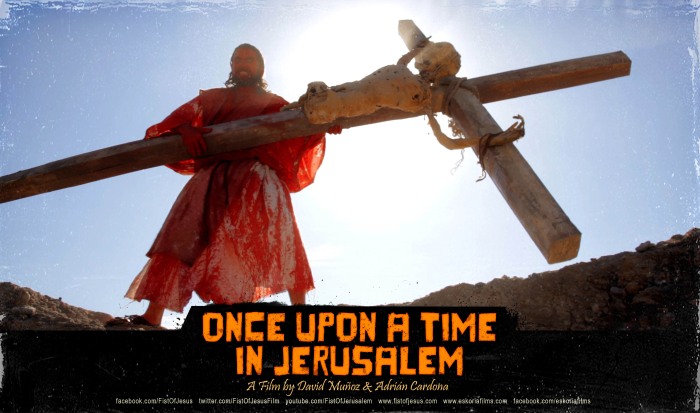 > Why are practical effects so important to you when CGI provides an arguably cheaper alternative?

Adrián: Digital effects don’t excite me, when I watch a great digital sequence I probably would say “wow it’s well done” but it’s cold, with no emotion and far from me as an spectator. I grew up with 80s films, I can’t deny that. Sometimes I think “If I wouldn’t have had this taste for traditional effects, now I will be experiencing great adventures at cinema with actual films full of effects”, but that is not my case and digital effects are not for me, no thanks, I prefer another kind of shit.

I’m a huge fan of puppets too, we are talking the same language and there are a lot of people in this way too. I don’t know if some day in future we will see digital effects with the same magic as the 80s fx, but not for now.

The problem in our productions is that the difference between a 2.000usd budget and 8.000usd is almost inappreciable related to fx. As an example if we want to crash “10 heads”, we can crash “10 tatty heads” with 1.000 or crash “7 tatty heads and 3 good heads” for 6.000. Obviously we prefer the cheaper option for this kind of party gore and save money for other aspects. We have found a easy cheap fx work process. We can do it better than in Fist of Jesus, we didn’t have enough time for preparing fx, all of them were made in 15-20 days.

> Is the entire film going to be funded on IndieGoGo?

David: Will be great, but we’re afraid we’ll have to put our savings on it, a film like this costs money and is really difficult for us to collect it from funders, especially having our audience on Facebook, that is a page that practically didn’t let you communicate with that audience, so I’m afraid lots of them won’t know about the movie until it’s done.

Obviously it will be a better movie if we get more budget, everything from IndieGoGo is gonna be spent on improving the monsters.

> You are offering some fantastic deals for IndieGoGo supporters, how important was it to give the fans something worthwhile in return?

David: Really important, as they will be the supporters of the movie. We have shoot several bloody shorts about Jesus and Judas that only are gonna be released on the exclusive Blu Ray and DVD we make for the backers, plus several more things so when the movie gets release they’re gonna have a really unique and limited object.

> Spain may not make many zombie films but they make quality ones (from the Living Dead at the Manchester Morgue to [Rec] and the short film Zombies & Cigarettes) why is that?

David: Yes, the think I like the most about the films are those that are not the typical zombie film, they all have something new. I personally love the Living Dead at the Manchester Morgue. I don’t know why, but in Spain we have made lots of amazing and cult fantasy movies, unfortunately they are cult movies out of Spain. These kind of movies here are really despised by the industry and cultural world in Spain, so it’s really hard to produce them here.

>Finally is someone was not blessed with a sense of humour, what would you say to them to encourage them to support the IndieGoGo campaign?

With your help we can do the most epic Jesus movie ever. Come on and become a funder!

You don’t need to be Jesus to help give this feature life, and with a short film evidencing the likely high quality of the film there really is no reason to not get behind this project.

Although we have supported crowd funded films before we are always sceptical but the offerings on this film blew us away with their diversity and value, so not only will you be helping support what looks like a genuine classic but also you will be getting a pretty good return for your cash. Still not convinced check the perks on the crowdfunding page and watch the short clip below; 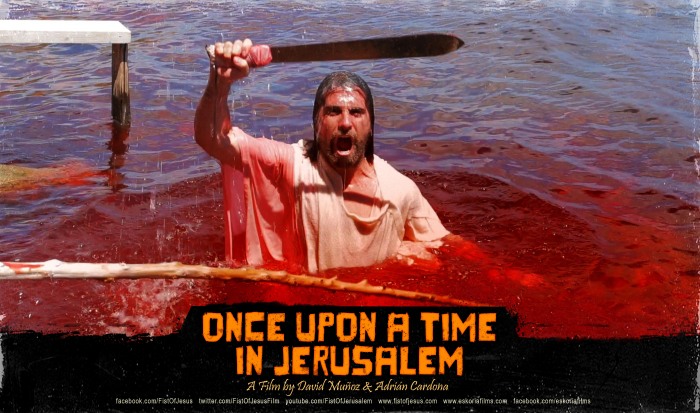