For this writer, there is nothing more beautiful than the printed word. As a collector of books and magazines for years, I find there is something uniquely satisfying about flicking through old issues of zines. We live in a society dominated by the internet, with many popular publications turning away from printed matter into the domain of fast and free web based hosting. It is true this does have its advantages; we are all just a click away from gathering the information we need, right when we want it. No matter how advantageous this may be- and it surely helps, especially with research- the web experience (and this is just a matter of personal opinion) falls short when it comes to having something tangible you can hold in your hand. On this score print always wins hands down; it has permanence and an enduring quality that must be cherished. Because of the internet boom it is harder to survive in print- especially in niche genre publishing- and therefore as fans we need to support the industry as much as we can. So we turn to today’s topic, a magazine in its infancy- not in its thinking, the publication comes with the backing of a wealth of genre experience- Delirium.

Delirium is a magazine that delves into the weird and wonderful corners that horror and exploitation cinema has to offer, veering away from the well trodden path to explore a little bit further- something usually overlooked by mainstream publications. It is very much a fan magazine, designed with the collector in mind. Delivered with the backing of Full Moon Pictures– as the official Full Moon magazine- the content consists of everything inside the studio universe (including sister companies). It arrives packed full of all the best stuff- the three’B’s’- blood, boobs, and balls, alongside retrospective pieces, fabulous interviews and what is more a centrefold film poster! (OK, I admit I am a sucker for a free poster!). Each feature is beautifully crafted with plenty of gratuitous eye candy and in-depth writing. 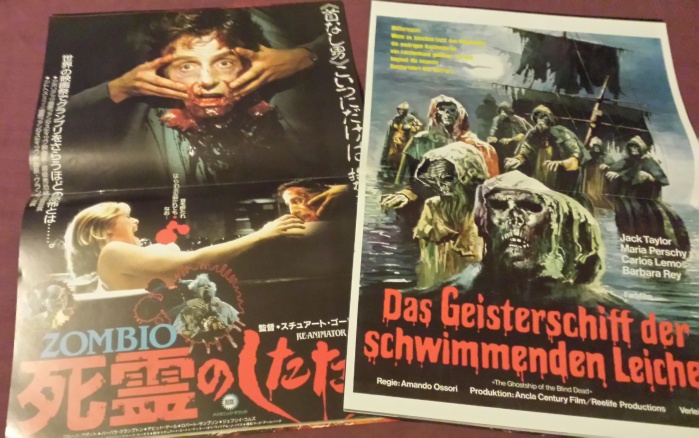 What self respecting horror fan can resist a free poster or two?

Heading the Delirium team is none other than Fangoria/Gorezone Editor in Chief and filmmaker Chris Alexander- a man who I am quite sure has managed to clone himself in some secret laboratory up there in Canada, because the time and commitment he gives to the genre is mind blowing. Chris also makes a huge contribution to the writing in Delirium and demonstrates a huge zeal and dedication to promoting the outer-fringes of horror and exploitation cinema. Chris has gathered a team of strong and passionate writers who bring with them a wealth of experience from the industry.

Issue One, launched in February this year with a gargantuan festival of all things Re-Animator. Director Stuart Gordon steps up to the plate to be interviewed about his time on the feature. There is also an in-depth interview with one of horror’s most-enduring Scream Queens the one and only Barbara Crampton, as well as composer Richard Band talking about his memorable score and a highly entertaining piece by Stuart Gordon on his ‘flamboyant’ times in the theatre. Also featured are pieces on Nurse 3D with an interview with director Douglas Aarniokoski and a chat with Killer Eye actress Olivia Alexander.

Issue Two kicks off with a celebration of one of THE defining zombie epic series of all time, Tombs of the Blind Dead, with an interview with cult Euro horror star Lone Fleming. There are also features with Carolyn Purdy-Gordon and part two of the contribution piece featured in issue one from none other than the Master of Horror himself Stuart Gordon. Also included is a preview on the Full Moon web series Trophy Heads, and interviews with Kenneth J. Hall, Scream Queen Irena Murphy, David DeCoteau and Retro Puppetmaster star Greg Sestero.

Issue Three focuses on the 40th Anniversary of a film that helped redefine the face of horror The Texas Chainsaw Massacre, including an interview with genre stalwart and director Tobe Hooper. This issue has just come off the press, and you can find out more about it here.

If you are different to me and do not get your kicks from a bit of magazine cover stroking, then the good news is you can go digital NOW! You can visit this page here and download immediately and soak in the exploitative goodness at a touch of a button. Whatever way you choose make sure you check out the magazine today- a magazine made by fans for fans, don’t miss out and get your copy now!

Check out the official Facebook page here to keep tabs on everything Delirium and Full Moon.