If there is one thing that can always be relied upon it is that any film containing genre stalwarts Christopher Lee and Peter Cushing in starring roles will always have some entertainment value. While the two are most remembered for their teaming up in The Curse of Frankenstein (1957), and their various showdowns as Dracula and Van Helsing, the duo paired up many times throughout their respective careers in the genre. Night of the Big Heat, now wonderfully restored to blu-ray by Odeon Entertainment, was one such joining of top talent. The film, a low-budget sci-fi Brit entry, (adapted from the similarly titled novel by John Lymington) came from the handful of offerings to be produced by the obscure Planet Film Productions- a company with seemingly little history or background to remark upon. What is remarkable is not only does this lesser known feature star two of the biggest names of the era, it is also directed by the capable talent of Hammer mainstay Terence Fisher. The three, Lee, Cushing and Fisher, all associated with the film that cemented Hammer Studios as a horror dominated production unit for most of the late ‘50s to the late ‘70s, the aforementioned The Curse of Frankenstein. 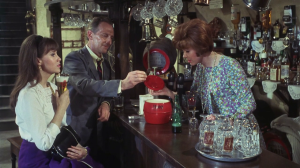 Now don’t get me wrong Night of the Big Heat certainly isn’t comparable to The Curse of Frankenstein in any way, shape or form. It is what it is, which ultimately is a hell of a lot of fun, and a film that will appeal to fans of the aforementioned cast and crew, plus those with an affection for ‘make do with what you have’ retro sci-fi. First and foremost, the film is so wonderfully British in its styling and attitude, it is difficult not to find something to love. Fisher’s production crew transform Pinewood Studios into Fara, an isolated island in Scotland, where despite being in the depths of winter, the locals find themselves amidst a searing heatwave. In good old British tradition everyone trots off to the local inn- run by Jeff (Patrick Allen) and his wife Frankie (Sarah Lawson)- to top up on a pint of bitter, and indulge in that great British pastime- moaning about the weather. Only one person seems concerned with this turn of events, Dr Godfrey Hanson (Christopher Lee) who after taking lodgings at the inn is undertaking some experiments to find a cause- his brash attitude, and dismissive manner, rubbing the locals up the wrong way in the process. Peter Cushing- in less of a starring role than the credits would indicate- takes a small role as local Dr. Vernon Stone who can be found mostly sat in the bar, sipping on half a bitter. As temperatures start to rise, a bikini clad Angela Roberts (Jane Merrow ) arrives at the island- innkeeper Jeff’s former lover who has hunted him down to resurrect their affair-, while locals are exposed to strange electrical noises, and the population starts taking an eventual downturn as a result of a mysterious force. With time running out, survivors start to fear for their own safety, but can those left manage to put their differences aside long enough to find the source of their problems?

What makes Night of the Big Heat such an entertaining experience is a number of things (including the schlocky effects, but you will have to discover those on your own), but if one thing stands out overall, it is the dynamic between the central characters. This is not a film that relies on flashy special effects to put its point across- perhaps because there aren’t any to speak of, and even the climax could be considered somewhat underwhelming, but nevertheless charming in a kind of twee way. However, Fisher and his crew, are able to summon an atmosphere that depicts temperatures are getting hotter, and hotter, and with that tempers also start to rise among the central cast. What starts off as a charming locality where everyone seems to get on in a very polite British sort of way quickly becomes a hotbed of petty squabbling, before- unable to take the heat- residents of Fara begin to lose the plot. This may be a little on the subtle side for some, but I loved the emphasis on the psychological aspects at play in the narrative- making Night of the Big Heat, a little different than immediately apparent.

It almost goes without saying that the stellar cast involved certainly helps matters along. Cushing, although only featuring in a handful of scenes, is- as always- the top notch consummate pro. Lee, in a bigger role, seems to relish the chance of being given something outside his usual remit- demonstrating a strong energy of ‘harassed expert’ in his performance. Lee as Dr. Hanson is a joy to watch, strutting around on screen, he gives off an air of someone who just doesn’t have time for the locals and their apparently (to him anyway) inane questions. One aspect I found highly entertaining was that during this blistering heat- and this is demonstrated by the cast apparently getting more and more drenched in sweat, and therefore wearing less and less in the way of clothes- is that neither Cushing or Lee remove their formal full shirt and tie ensembles, even when the rest of the cast do! Patrick Allen as Jeff Callum- our central hero- makes for a pretty untypical leading man, swayed by the attentions of Angela, and getting increasingly annoyed with his situation as the plot moves on, it is lines like- “Now you know. She was a slut, and I wanted her” – that make Allen’s role stand out from the usual one-dimensional nice guy protector types that often dominate the genre. Sarah Lawson steps in as doting wife Frankie, and in a sign of the times appears to aim most of her inner rage at love rival Angela rather than her philandering husband. Actress Lawson would team up a year later, with Christopher Lee, for Terence Fisher’s memorable satanic panic episode for Hammer- The Devil Rides Out (1968). While Jane Merrow as the lustful Angela comes as a welcome addition to the cast, portraying a very different character to the wittering, and sheltered, blind girl she plays in Hammer’s Hands of the Ripper four years later- the actress should have won an award for the things she does with ice cubes, in Night of the Big Heat. Although not overtly sexual- given the time- Merrow’s performance, and not to mention slinky bikini, do add some spice to the proceedings.

This blu-ray edition from Odeon Entertainment is a wonderful upgrade. It is true that dust and flickers are evident on the print, but you have to remember this is an obscure, low-budget feature, and as such it is a wonder this has even made it to blu-ray at all. The print demonstrates a gorgeous depth and grain, demonstrating that authentic cinematic look- without even a sniff of a shiny face, or DNR process damage in sight. While the colours and the details look amazing- having seen this on a poorly rendered DVD copy in the past-, the contrast in quality is astonishing. Thankfully the restoration hasn’t got too carried away, and the print has retained all its retro flavour and charm as a result.

The extras package here is the real icing on the cake. Kicking off with an audio commentary with star Sir Christopher Lee- in a particularly jovial mood- the actor discusses his memories of shooting the film with scriptwriters Pip and Jane Baker. Lee’s commentary is intensely satisfying, covering his long-time friendship and working relationship with the late, great Peter Cushing, alongside the difficulties the cast and crew encountered filming a ‘heat wave’ in the middle of February. Following on, on the theme of Sir Christopher Lee there is also an interview from British Legends of Stage and Screen; a featurette in which the actor proudly discusses his career, talking about his experiences, and also his family roots- this makes for a highly entertaining watch, and Lee is obviously thoroughly enjoying the experience.

There is a lot of good old British fun to be had in this newly restored blu-ray edition of Night of the Big Heat (also available on DVD) from Odeon Entertainment. A beautiful upgrade given the age and status of this lesser known film, with a great package of extras, check out Odeon official for more details here. 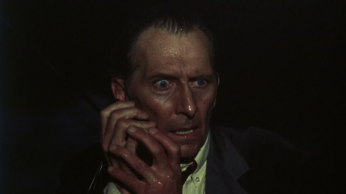