I would barter that it is almost impossible to be a horror fan and not have seen at least one Troma film (perhaps if you have been living in Outer Mongolia maybe not, then you may be forgiven for not having had this pleasure). Troma, the mark of ultra-low-budget, gross- out gore and (generally) comedy style horror, has dominated the scene with their balls out renderings of trashy hokum and their gleeful celebration- in film format- of everything in the worst possible taste, since 1974. If you haven’t seen a Troma film, the likelihood is you will still know how to define one. If the brand can offer anything of a legacy to the cinematic universe, it is that Troma has become a sub-genre in its own right. With a lot of their horror/comedy offerings Troma takes everything great about splatstick and then injects that with steroids and ample cartoon flair; making the company one of the most unapologetic, anarchistic, forces to exist in the realm of horror today. Granted they don’t always get it right, and they also have a unique ability to polarise audiences, but despite this, they still keep doing what they do, without compromise. Whatever your stance on Troma, love it or hate it, you have to admire the spirit at least. Back in 1984, when the company was just getting established, they made The Toxic Avenger, the film that became their calling card and one that remains very much at the heart of everything the company does today. As the film reaches its 30th anniversary, it gets a fresh new release to super-duper Blu-ray, courtesy of the 88 Films: Nuclear Uncut Edition. This announcement has been a cause for celebration from many UK fans of the film.

The Toxic Avenger is one of those films that stands as testament to just how fun and out there eighties horror/comedy could get. The freedom of the direct to video movement meant many independent filmmakers could get away from big studio backing and do whatever the hell they wanted. There is a rare spirit of freedom conveyed in many of the films from this period that simply seems to be dying out in this modern age. The films- like the grindhouse movement that went before them- offered pure entertainment, no more, no less, and The Toxic Avenger is one film that carries this sentiment at its heart and soul; thus, it stands out, for me anyway, as a highlight of the era. The Toxic Avenger was a major success for Troma, and it is not surprising the film sparked a number of sequels, a merchandising line, and weirdly a kid’s cartoon series (shown in 1990), alongside the story’s central hero Toxie becoming the company official mascot for many years to come.

Directors and Troma founders, Lloyd Kaufman and Michael Herz make no bones about their subject matter, delivering a fast paced, high octane festival of gory comedy that comes delivered packed full of punk rock attitude. The story focuses on Melvyn Ferd (Mark Torgl), super geeky health club janitor who falls foul to a cruel prank and gets dunked in a vat of toxic waste. This episode transforms him- in a melt-tastic scene- into super hero Toxie (Mitch Cohen), a deformed hulk of a figure who dons a charred ballet tutu. But what else could you possibly expect from a film that in one of its early scenes displays a 12 year old boy getting his head crushed under the wheels of a speeding car like a blood blister? The Toxic Avenger is a film that sets the bar in gross -out humour, reaching new levels in offensive content that will thrill those who love to laugh at things you probably shouldn’t. The story has a lot to offer too; it has romance- in the form of Toxie’s blind girlfriend the goofy Sara (Andree Maranda)- gore, yes tonnes of glorious gore, an underdog hero, nudity, and the underlying story of crime and corruption on the streets of Tromaville. Toxie takes to the streets to clear up the mess left to thrive by mafia boss styled Mayor Belgoody (Pat Ryan Jr., Street Trash, Class of Nuke Em High), and in the process not only wins the hearts of the residents of Tromaville, but has secured his place as an enduring icon in the vaults of eighties’ horror. Granted his methods might be a bit unconventional, but at least he gets the job done. In Toxie’s quest we see him take on every possible stereotype of bad guy from High school bullies (these are of the Troma variety, so bear in mind they kill people with their pranks), paedophile pimps, armed robbers, cop killers, right up to government corruption. The film never runs out of ideas to despatch the forces of evil either, and the practical effects are deliciously grotesque and brilliantly executed- with the exploding heads being stand out highlights.

Upgraded to Blu-ray, the film looks better than it ever has, the restored version being slick in its presentation, with bright, bold colours, and strong definition in the details. In fact, I would go so far as to say it was a bit of a shock to see the film looking so minty fresh, and this is a far cry away from the dodgy quality displayed on some of the previous releases to DVD and VHS. The film isn’t heavy in grain, but it comes with a nice texture in the little details. The best part is you can now revel in how great the effects are, and there are many to assess. As mentioned, the colours are bright, but never oversaturated, meaning the flesh tones remain on the natural side. All in all, this is a great restoration for a low-budget number onto digital format. The film comes presented in its uncut form, presented in 1080p high definition in 1.78:1.

The extras here come in the form of a number of Troma related promos, and Lloyd Kaufman skits that for those acquainted with the brand are going to be familiar with. Included on the list are- 15th Anniversary Introduction by Lloyd Kaufman, 30th Anniversary Introduction by Lloyd Kaufman, The Radiation March, Intro from Toxic Crusaders cartoon, Toxie – 15 Years Later, Tromaville Café – The Death of Toxie, Troma Studio Building Tour, Mopboy Secrets with commentary by Mark Torgl, Why is Lloyd Kaufman living in a refrigerator box?, Public Service Announcement, Aroma Du Troma, Toxic Slide Show, Theatrical Trailer , Bonus trailers: Bloodsucking Freaks, The Toxic Avenger 2, The Toxic Avenger 3, Citizen Toxie- it is fair to say you could get lost for a fair few hours among all this lot. But the icing on the cake is the inclusion of the extended Japanese version of the feature length film, complete with the original introduction, which plays out (minus the intro) nine minutes longer than the main feature. The second cut is delivered in standard definition and does not display the picture quality of the restored cut; however, it is an interesting inclusion as part of the package. The extended version offers nothing much more in the way of gore, but does elaborate on the romantic scenes between Toxie and Sara, there is a longer montage scene with some flashbacks, some extra dialogue with key players, and most importantly a scene in which two of Toxie’s ‘victims’ turn up at the police station as the film marches towards it climax- this alters the context completely, as the main feature is edited so you do not see the fate of the aforementioned individuals. The main feature also comes with an optional audio commentary with writer/director Lloyd Kaufman. This all region disc is presented with a reversible sleeve.

Existing fans and those who love their horror comedy on the gross-out side are bound to lap this edition up. Looking better than it ever has The Toxic Avenger still stands as one of the highlights of trashy eighties horror/comedy. With a large package of extras, it is unlikely fans are going to be disappointed with this new release. Check out the 88 Films Official page for more details on where to buy here. 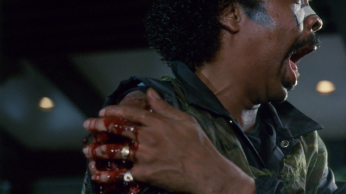 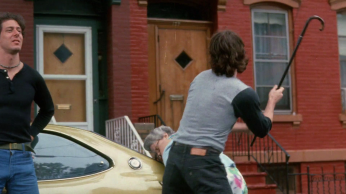 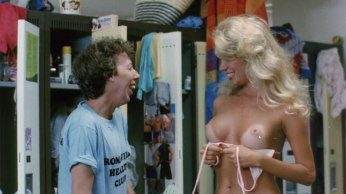