That’s some violent shit right there!

Having a keen interest in European horror, it was with equal joy and dismay that I found out that the Andreas Schnass and Steve Aquilina created film series ‘Violent Shit’ was being given a reboot by arguably the hottest new Italian horror director, Luigi Pastore (Symphony In Blood Red) but for anyone who has seen the original films by Schnass…you have to wonder not only why do it but also can the Italian bring a sense of style to the abundance of gore?

The previous films centered on the character of Karl the Butcher, a killer loosely in the vein of Jason in the Friday the 13th franchise or Victor Crowley in Hatchet, the question is now can Karl fulfill his promise and shed enough blood to become a legend?

I managed to catch up with the director to ask him about his most recent project and what he has in store for European horror fans through his label LUPA.

GSC: This is quite an obscure film to bring back, what attracted you to the film?

LP: I was very interested to the character of Karl the Butcher (KTB) and his extreme violence.

In the saga, the character has many obscure points, So, we decided to build a story to explain the origins of KTB and his link with the devil.

GSC: Are there any plans to re-launch the franchise or is this a one-off?

LP: I believe that there is a desire to revive the saga of Violent Shit, but first we have to see how the public will react to this new film.

GSC: Does the film follow the rules and world originally created by Schnass or have you had free-reign to do what you want?

LP: I looked very carefully at the trilogy, so I tried to put into the plot some references to the three previous films. For the rest we had creative freedom and the idea that we liked was to move the story to Italy.

GSC: This combination of elements from the first three films (such as the infamous mask) is shown in the promotional shots,) what can you tell us about the plot?

LP: The film’s story is inspired by a factual crime that actually happened a few years ago in Rome, when a body of a woman was found without limbs, devoid of internal organs and decapitated. A brutal murder at the hands of a murderer still on the loose. So we imagined that it could be the work of Karl The Butcher, while the movie also follows the inspector Hans Ebert from Interpol (played by Steve Aquilina), arriving in Italy to assist in the investigation with his counterpart Aristide D’Amato.

GSC: You have cast the legendary Giovanni Lombardo Radice and given guest appearances to Enzo G. Casterllari and Luigi Cozzi, how wdid you get them involved and what are their roles?

LP: Giovanni is really a great histrionic actor. I felt great emotion at seeing his interpretation of the character, Professor Vassago, so mysterious and ambiguous, which was just as I imagined him.

Luigi and Enzo play the roles of two chief inspectors of police and forensics. It was great for me to direct not only two giants of cinema, but also my friends. 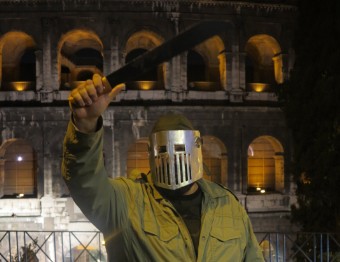 GSC: The promo shots appear to keep the excessive gore from the original films, how much blood was spilt on this shoot and how extreme have you made the film?

LP: The ultra gore is the movie’s key! Hectoliters of blood have been spilled. I wanted to really go into excess with the special effects, executed by the excellent David Bracci. There is a scene so disturbing, that made me feel bad when I shot it!

GSC: Similar to your debut effort ‘Symphony in Blood Red / Come una crisalide’ the original ‘Violent Shit’ focused more on the killer than the victims; do you have sympathy for the killer in your films? Is this what helped attract you to this film?

LP: No, I don’t feel sympathy for the serial killer. I’m interested to the investigation on the origins of a serial killer. I don’t celebrate the murderer’s figure, but I just try to represent the evil.

GSC: How do you feel that you and the Italian scene have progressed over the last few years since ‘Come una crisalide’?

LP: No progress in Italy, but (only) interesting developments in Germany and the international market. In Italy this genre is not appreciated.

GSC: What is next for Luigi Pastore and Karl the Butcher?

LP: The future of Butcher is still a mystery! Meanwhile I’m working on a new project with the great Tom Savini in the lead role. It will be a thriller movie, very complicated, full of twists and turns.

GSC: You put out your last effort on LUPA film and now have a new horror production company with a movie already announced, what can you tell us about this?

LP: I founded the new label LPLM Produktion for the German and international markets and in November 2014, at the next Weekend of Horrors, we will present the first movie of this new product line: Hippocampus M 21th, the debut of director Alexander Fennert, which is inspired by the work of Rino Di Silvestro with a very personal language.

We can be sure that with this director, the Violent Shit reboot promises gallons and gallons of blood, excessive gore, legends of the Italian horror scene and judging from the promotional shots some very gorgeous women. You can find out more about Karl the Butcher and the production of Violent shit over on the Official Facebook page here.

Meanwhile, if you need to recover from that brutality and are looking for something a little more cerebral and freaky, the more curious of you might want to check out the first film from LPLM Produktion Hippocampus M 21th here or visit the Facebook page.

Gore hounds and trash aficionados rejoice, for Karl the Butcher is back. See the trailer below: